Rail fares are going up again – or rather, most are, while a few are not. And of those that are increasing in price are the season tickets of those who, for whatever reason, commute into London over distances that those in other European countries would not even consider (there are those who commute daily into the capital from Bristol, Newark, Birmingham and Winchester – and beyond). 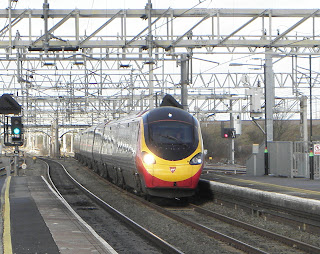 Nuneaton - "only" 97 miles from London

The figures make grim reading: an average increase this time round of just over 4%, with the past six years having seen an increase in earnings of under 16%, while the cost of rail travel has increased by a whopping 40%. So what do commuters (who don’t need the press to tell them that they are “hard pressed”) get for an outlay which can extend well beyond the four figure mark annually?

Those living in Brighton, to pick a town with a large commuter flow over a middling (for the UK) distance, now have to stump up just over £4,000 for an annual season. So, provided you do 20 round trips a month, over ten months of the year, this works out at around £20 a trip, and just under 20p a mile. And travel over any “permitted route” at weekends is thrown in at no extra cost.

There are also bargains to be had, and not just with book-ahead tickets: it is still possible to get from Crewe to London for £28 return, working out at well under 10p a mile. But these fares do not hit the headlines: rather, it is the peak time walk-up fares for the fastest trains that hacks home in on. And they certainly look expensive. So the blame game starts. And most of the participants get it wrong.

Even dear Bob Crow of the RMT Union, who, it might be thought, would know one end of the industry from the other, can’t point the finger accurately: “Anyone who thinks that this massive fares surcharge will be invested in our railways needs their head examined. This cash windfall will be siphoned straight into the pockets of the private train companies without touching the sides”.

Never mind, perhaps the press have figured it out. Or maybe they haven’t: the Mail suggests that Network Rail’s management salary structure is a contributory factor, which, if you’re measuring ticket savings in fractions of one penny, is right. Transport Secretary Patrick McLoughlin waffles about fare rises ending in time for the next election, as if commuters have shorter memories than most hacks.

And his shadow Maria Eagle blames the Tories, which is disingenuous, because the correct answer is that not only is the Government behind the fare rises, but it has been the case whoever has been in power recently. Of every £1 paid for a ticket, almost half goes to Network Rail, which is state-owned in all but name, with the operators getting 3p for their profit. That is down to successive Governments.

If Governments do not change that arrangement, then it will continue. Simples.
Posted by Tim Fenton at 17:16

The mechanics of how the railway is run ( Roscos, delay attribution, backroom staff, bus bandits and DB Rail (German State owned dontcha know) etc...
contributes to the fare rises also.
Time for a whole rethink on transport policy with integration at it's heart methinks.

Whoever RUNS the trains makes little difference. As Tim points out, 50% of fare revenue goes straight to Network Rail. Then a huge wedge goes to the leasing companies - some of the 1980s Sprinters have been "bought" 4 or 5 times over by the TOCs since privatisation. And then there is the fuel, not helped by a European standard trailing reliance on diesel. By the time you get down to the bit the TOCs have some control over it doesn't make a big difference what they do. I'm surprised commercial companies ever bother to get involved, in % terms the margin is barely worth the effort.

There are two problems in the story, which like Christmas and what a scorcher/washout summer has been, is in the idle editors diary well in advance*. First is the old and little known law which says journalists are not allowed to know anything about railways - solidly adhered to in this country and elsewhere (I've just been reading a story on Austrian TV news webpage that comes to the staggering conclusion that if you want a train ticket for travel within Germany it's cheaper to buy it direct from DB than through Austrian Railways as foreign agents - you don't say). In this case they've got very excited by 4.1%, very precise and unlikely to be the actual increase of any fare! Some will be less and some more, not just because of marketing but because adult fares before railcard discount are always adjusted to the nearest 10p to make the change easier for conductors! On a fare under £10 that alone can vary the increase by almost 1% either way. And of course, they've run it as a national story when it only applies in England - the Scottish and Welsh Governments will quietly announce their's later.

And the second problem as Tim has hinted at is the commuters, or more accurately, commuters to London. These people have an attitude that value should be counted as pence per minute not mile. So if the railways spend a few billion making the journey faster in their minds it should be cheaper because they aren't on the train as long! 20 years ago I was working in Westbury (Wiltshire, near the Somereset border) and looking out over the station at before 0700 saw a good hundred people waiting for their daily commute to London. Today they will struggle to get seats because so many get on earlier at places like Taunton. This is madness by them and financially dodgy for the TOCs. The Swiss Rail companies (you remember them, best in the world and cheaper than us according to British papers but getting unreliable, prone to crashes and poor value according to Swiss papers) are now getting the beginnings of similar long distance commuting and there are calls to alter their season ticket system to discourage it. Remind me, how many reports of that have there been in the British media? When HS2 reaches Crewe the journey time to London will be similar to Northamptons by ordinary train and there will be hundreds looking at Crewe house prices thinking they can move here and commute at the same price they currently pay.


* actually it's in the diary twice a year, first in August when the rate is announced and second in the first week in January when it's applied. Newspapers will quite happily charge you twice for the same story. The Minister should have spotted that both dates are traditionally flat news weeks...

I agree about Network Rail ( or Notwork Fail if you prefer) about taking up most in track access, they (and the TOC's) have many inefficiences, delay attribution being just one of many.
The likes of DB, First, Virgin etc... are involved for the easy money, unless they make bizarre unworkable bids ( Nat Ex East Coast).
Anyway, we either have a truly private railway with no Dft or government involvement whatsoever ( meaning that private firms pay for electrification, upgrades etc...)
or we go back to nationalisation with decent managers (think along the lines of the old NSE)
because the current system is just laughable.