There are hundreds of microbreweries around the UK. So many that even aficionados of decent beer (such as Myself Personally Now) cannot hope to have even heard of most of them. And, until yesterday, I had not heard of Redwell brewery in Norwich, which takes its name from the city’s Redwell Street. But now, thanks to a clumsy and pointless piece of corporate bullying, I have. 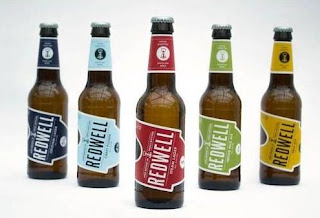 Could you really confuse these with an energy drink?

Redwell is a recent startup, employing less than ten people and getting its distinctive house style from local design students. Its simple strapline is “Beer brewed in small batches”. So far, so uncontroversial, but in May, the company tried to register its name as a trademark, and soon everything kicked off as energy drink monolith Red Bull, armed with suitably expensive lawyers, came after them.

Now, brand disputes within the brewing industry are not unknown, with the most notorious probably that between the US Budweiser brand, and the beer brewed in the Czech city of České Budějovice, or, in German, Budweis. There is, of course, little chance of confusing the two beers, given the US brew’s reliance on substitute ingredients and cheaper hops.

But Red Bull is not in the brewing business, and nor is Redwell brewery in the market for so-called energy drinks. That hasn’t stopped their “Brand Enforcement Manager” from alleging that “it was ‘likely’ that customers would perceive the brewery's drinks as an ‘imitation’”. Ho yus. Like I’d want a can of Red Bull, but buy a bottle of Redwell IPA or Pilsner by mistake.

And you’ll love the detail of the claim: “The term B-U-L-L and the term W-E-L-L share the same ending and just differ in two letters. The ending (L-L) is identical and therefore the terms RED BULL and ‘Redwell’ are confusingly similar from a visual as well as from a phonetical point of view”. Are they buggery. But I bet Red Bull win in any “My lawyer’s more expensive than yours” competition.

This creative claim has had one unexpected consequence for Red Bull, whose “Brand Enforcement Manager” may not have bothered to Google the phrase “Streisand Effect”. Almost as soon as the BBC and ITV News ran the story about Red Bull’s action against Redwell, the brewery’s website received offers of assistance, together with severely adverse comments on the claimant.

And today, showing what a difference a little prior engagement of brain makes, Red Bull has declared that “there is no dispute ... Red Bull has long been willing to allow Redwell to maintain its mark for beer so long as they do not use it for energy drinks”. Aye, and I believe them too. Not. Thus the end of another pointless attempt to use corporate might for very little point.

Rich people reaching for their lawyers would be well advised to pause and consider.
Posted by Tim Fenton at 12:46

Was it the Streisand Effect, though? Isn't that an attempt to conceal something resulting in bringing it publicity?

I rather get the impression Red Bull were happy to let everyone know what they were doing, oblivious to how daft it was.

Known problem - drink too much Red Bull and you get edgy and over excited. Perhaps their managers should drink more water.


And, did anyone register a name before them that would now invalidate their claim using their rules?

eg is there a country house hotel called Red Hall?

I wonder if Reedball.com advised them on their wealth management first?!

There really is a Red Hall hotel (in Bury) and they had the name 9 years before Red Bull drinks.

I've also found a Red Hall clinic in Lincoln who use homeopathic treatments to deal with stress related problems - sounds like certain lawyers could use them!

There was a Reg Bull Engineering Ltd but regretably it ceased trading - otherwise Mr. Bull might be in the money!