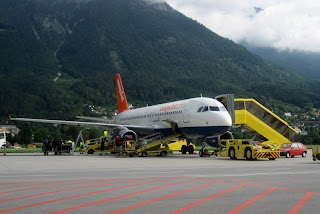 An EasyJet Airbus A320

This was not enough for the Mail: “EasyJet flight carrying 174 passengers forced to make emergency landing after engine cover is torn off during take-off” screamed the headline, with readers told of “terrified holidaymakers”, and that “Fire engines were on standby as the drama unfolded”. Passengers had been “put through the evacuation drill”. So this was a real emergency, then, was it?

Well, maybe not: the photos in the Mail’s article show that disembarkation of the aircraft was normal: passengers used the exit doors. No emergency exits were opened, and no slides deployed. And fire engines are always on standby. But this was not dramatic enough, and so social media sites were trawled. One passenger’s Facebook page later, and everything looked so much more dramatic.

For starters, this passenger claimed to have been “screaming” that “a piece of the wing has gone flying” (given that the plane had taken off, I should sodding well hope it had gone flying). There had been several minutes’ delay, and then the plane circled for another 20 minutes. Sadly, it is not difficult to find a more fact-based account of the incident which states otherwise.

“An Easyjet Airbus A320-200, registration G-EZTC performing flight U2-2715 from Milan Malpensa (Italy) to Lisbon (Portugal) with 174 people on board, was in the initial climb out of Malpensa's runway 35R when the left hand engine's (CFM56) doors opened and were subsequently torn off the engine. The crew stopped the climb at about 3500 feet and returned to runway 35L for a safe landing about 10 minutes later”, Aviation Herald told its readers.

So forget the Mail spouting bullshit about an alleged similarity to the Concorde crash in Paris some years ago (the control tower at Malpensa saw the door detaching, whereas that at CdG did not). This appears to be a straightforward maintenance issue, with the engine cowl not being properly secured.

Apparently some of the latching on the CFM56 engines used by the A320 and similar aircraft is on the underside of the cover, and therefore needs a little more attention during inspections. Expect to see EasyJet reminding pilots to pay that bit more attention during walkrounds, and whoever maintains their aircraft at places like Malpensa to be told to be equally vigilant.

And finally, folks, flying has never been safer. So ignore the Mail and get aboard.
Posted by Tim Fenton at 10:34

This reminds me of the accident to G-EUOE at Heathrow only a few months ago, where the fan cowl doors on both engines of an A319 were left open and detached on departure. Among other things, this caused the loss of one hydraulic system and a fire in the right-hand engine bad enough that the crew shut it down.