Media bloggers, in case anyone was not aware, do not exist totally independently of one another: on occasion, there are gatherings where news and ideas are freely exchanged, folks get to know and understand one another, and there is some consumption of refreshment. It is not giving too much away to tell that the next of these is likely to take place in London, and that I may attend. 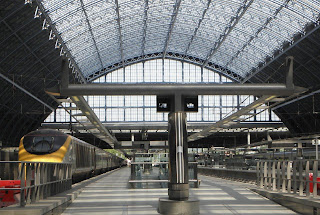 A meeting may well happen somewhere near here

Another regular attendee at such meetings is the serially tenacious Tim Ireland of Bloggerheads fame, whose observation that “I blog about liars in media and politics. I often get lied about as a result” is in reality a considerable understatement. To observe the lengths to which some will go – and the depths to which they will sink – in order to try and shut him up is to observe the very nastiest side of The Dark Arts.

This includes the kind of behaviour that tabloid hacks consider acceptable, provided it is them doing it to others, and not the other way round. Daily Star showbiz hack Nigel Pauley, who took exception to my characterising him as “a nasty little man” recently, took to Twitter in a routine act of malicious defamation to show that he is indeed nasty and little in equal measure. 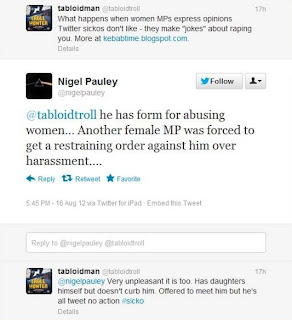 “He has form for abusing women ... Another female MP was forced to get a restraining order against him over harassment” he asserted. And, going once more into Jon Stewart mode, two things here: first, Tim Ireland does not have form for abusing anyone – period – and second, nobody has taken out any order of any kind against him, and he has not subjected anyone to any kind of duress. 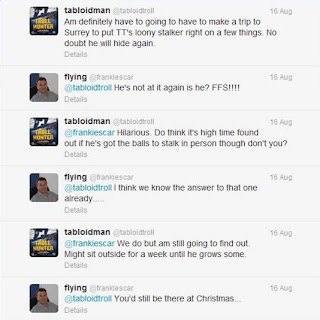 Yet Nigel Pauley clearly believes that publishing such remarks is a legitimate tactic, as no doubt does former tabloid hack Dennis Rice. Rice, who still attempts to hide behind the alias Tabloid Troll, went after a number of bloggers in his bullying and threatening way and came unstuck when Tim Ireland unmasked him. Rice got his comeuppance but his congenital stupidity prevented him from taking this on board. 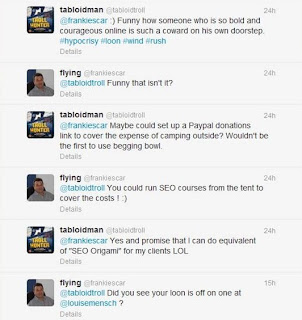 So, aided by an obedient echo chamber, Rice has taken to physically threatening Tim Ireland, and by inference his family. Combining his threats with accusations of stalking, Rice tells that he is “going to have to make a trip to Surrey to put [Ireland] right on a few things” and that he “Might sit outside [his house] for a week”. He then makes the goading observation “such a coward on his own doorstep”. 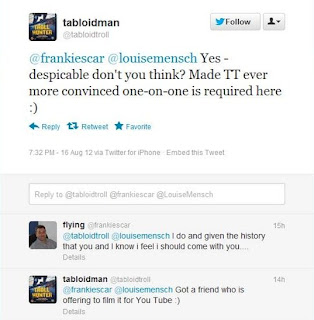 And, just in case anyone thought this wasn’t a physical threat, he states that “one-on-one is required here” before his echo chamber volunteers to accompany him and Rice says “Got a friend who is offering to film it for You Tube [sic]”. If anyone did that to Rice and his pal, the protests would be long and loud, and the Police would be called PDQ (Rice is already known to his local force).

But it’s fine for him to do it to others. Utter, utter scum.
Posted by Tim Fenton at 14:55

Thanks for taking the time to cover this. Greatly appreciated.

FYI: It's worth mentioning that Dennis Rice & Nigel Pauley are so tight, that for a while many people suspected the latter of being @tabloidtroll

Tim Ireland ... has not subjected anyone to any kind of duress

Now, come on. He has subjected various people to highly uncomfortable levels of truth, and fatalities have likely been avoided so far only thanks to the free availability of calculated nastiness and tinfoil hats. If that isn't duress, I don't know what is.

Funny how these tweets from Troll/Rice all point to it being the work of just one man, rather than the several.

Funny also how Troll's blog, which claims to be 'written by a number of anonymous national newspaper journalists' has only managed 8 not-exactly-lengthy posts in three months, half of which are about Tim.

Also, if Troll/Rice is so keen to remain anonymous, why would he offer to meet one of his main critics and have the incident filmed?

My first guess would be that he would not be the person who actually showed up.

My second guess would be that, if Mr. Ireland had such confidence (or disregard for his family) as to tell Mr. Rice to bring it, a fairly large group of people would show up, as intimidation seemed to be the object of the comment.

My third guess would be that the threat may be wholly empty, in an attempt to try and get Mr. Ireland into trouble for vexatious complaints, or wasting police time, out of genuine concern. I'm not sure how that would work out, as events to date suggest that Mr. Rice previously lacked the forethought to cover his tracks in terms of IP data.
3b would involve some combination of sustained provocation to this end and some attempt to threaten, harass or intimidate Mr. Ireland's family while he is otherwise occupied as a result.

Admittedly, I'm an idiot, and there's a lot of second-guessing here, but none of the options present a risk small enough to be worth it if there are children involved.