Express And Mail In Statin Dispute

Budgets are clearly tight at the Desmond press since the less than anticipated profitability of the Health Lottery caused Dirty Des to send yet more unfortunate hacks down the road. So at the Express, front page splashes have had to feature rather more stories cobbled from press releases, with the “miracle cure” and “wonder pill” ones proliferating of late. 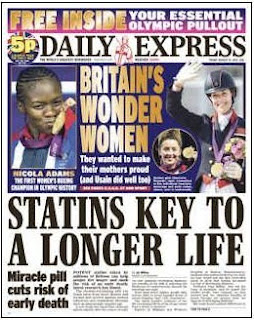 And so it was this morning, as Jo Willey told readers “Statins Key To A Longer Life”. Yes, “POTENT statins taken by millions of Britons can help people live longer and slash the risk of an early death, latest research has found”. So this is yet another clinical trial taken in isolation, is it? And which UK hospital or other medical establishment is involved this time?

Well, it’s not one in the UK: “Experts at Brigham and Women’s Hospital in Boston, Massachusetts, analysed data gathered during the Jupiter trial, which was the first controlled study to show that statins increased the risk of developing diabetes”. So the study is to do with developing diabetes, and the “longer life” bit is an assumption tacked on at the end.

That’s about it. The Prof in charge added “absolute benefits of statin therapy are greater than the hazards of developing diabetes”. So the Express story is a selective take on one study into diabetes risk. And, strangely, their conclusion disagrees with yesterday’s Mail, which also featured an item on statins, although as the paper is decently resourced, it didn’t have to be blown up into a front page lead. 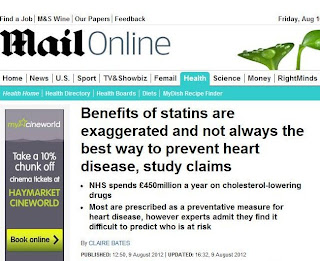 “Benefits of statins are exaggerated and not always the best way to prevent heart disease, study claims” asserted the headline in Claire Bates’ piece. And there’s this quote further down the article: “most people will not receive life extension from statins”. So, depending which paper you read, statins are either “key to a longer life” or they aren’t.

It’s down to whether you believe the claims of someone peddling an upcoming TV documentary, or someone cherry picking one clinical trial in the USA. Either way, both can safely be taken with a significant pinch of whatever you substitute for salt in your diet. Phil Space journalism at its cheapest and nastiest.
Posted by Tim Fenton at 10:48