The Tory MP for Welwyn Hatfield, currently serving the Coalition as Housing Minister, has featured previously on Zelo Street, when the large numbers of Twitter follows and unfollows generated by his account passed before my inspection. This was after Political Scrapbook asked openly the question many had already voiced privately: was he using a robot to boost his following? 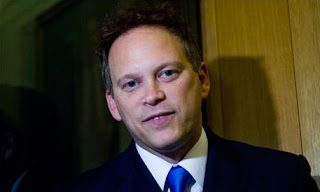 Twitter followings, and the means employed by some across the political spectrum to increase them, have been the subject of many posts on this blog, causing someone to have their nose put out of joint to the extent that they bought me several thousand spurious ones in an attempt to embarrass me into shutting up (the same trick that was pulled on Louise Mensch). Well, folks, it didn’t work.

Because the act was discussed openly and freely at the time, and the investigations have continued: today we return to Grant Shapps. The MP countered the suggestions that he was using some kind of bot by telling local paper the Welwyn Hatfield Times “who he chooses to follow is entirely his own decision”. So, keeping that comment in mind, let’s look at how his account is doing. 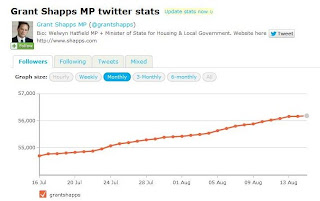 Last time we looked at Shapps’ following, it had increased from around 53,000 to 55,000. Now it has increased yet further, to over 56,000. This is entirely down to the decisions of all those tens of thousands of account holders to follow Grant Shapps, and I do not pretend otherwise. This is something over which he does not have any control, and I make no suggestion that he does. 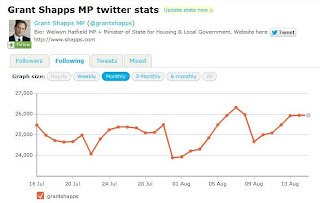 Now look at the number of accounts he follows, this being “entirely his own decision”. So, on the last two days of July, he decided to follow an additional 371 accounts, then decided to unfollow 1,595 of them. How he had time to make 1,595 decisions, let alone do any other business or work on July 31, is an interesting conundrum, on which I will not comment further.

Grant Shapps has said “Sometimes I’ll follow people who have interesting things to say”, so this suggests he reads an account’s Twitter feed before making his decision. He has also said “No-one else has access to my Twitter account ... the decisions as to who to follow are entirely mine”. But the sheer volume of follow and unfollow decisions appear beyond the limit of human ability, given the timescale involved.

Perhaps the Housing Minister might like to explain how this is accomplished.
Posted by Tim Fenton at 11:11

Well, he is only Housing Minister, and I don't think he's housed anyone since he got into office, so plenty of spare time there.