The way that Richard “Dirty” Desmond runs his newspapers on a shoestring, lifting copy from other papers and news sites that has already been published, has been noted many times on Zelo Street. But for one of its hacks to let slip that lifting is about to happen is a bonus, and this was brought forth by the Express’ chief political commentator Patrick “Lunchtime” O’Flynn on Friday. 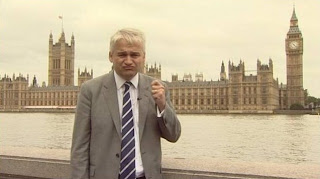 Isn't the Express allowed any closer?

“Lunchtime” took to Twitter to refer to a piece under the by-line of Robert Winnett in that day’s Maily Telegraph, telling that Young Dave was about to shelve plans for reform of the House Of Lords, a key Coalition policy which has been opposed by over 90 Tory MPs who clearly have not taken on board that they are only on the Government benches because of their hated Lib Dem partners.

“Lords reform off, boundary changes off, coalition in big big trouble” he Tweeted, oblivious to the inconvenient fact that his own paper was not covering the news. Given the ability of the Express to lift and recycle, I replied to him “In the Express tomorrow, then, is it?” which irritated The Great Man so much that he claimed to have covered the story two weeks previously. 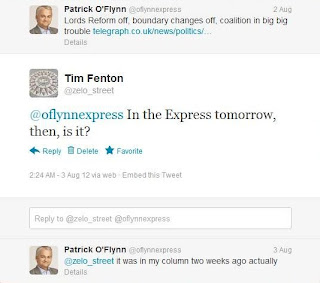 Sadly, “Lunchtime” is not in possession of a Tardis, and so his claim can be taken with a suitably generous pinch of salt. And by the next day, Express watchers were indeed given more or less the same news that had been in the Telegraph, although it was condensed down in Alison Little’s version. But the following paragraphs show where she got the original.

Here’s Robert Winnett in the Tel: “dozens of Conservative MPs and peers expressed their strong opposition to the proposal amid fears it would undermine the supremacy of the Commons”.

And here’s Alison Little in the Express: “many Tory MPs feared the package, in which elected ‘senators’ would serve 15-year terms, would undermine the traditional supremacy of the Commons”.

At least the headline, changed from “David Cameron retreats on House of Lords reform” to “Lib Dem Threat Over Lords Bill”, is distinctly different. And thanks are due to “Lunchtime” O’Flynn for warning all Express watchers that his fellow hacks were about to recycle the Telegraph article for their own use. With that kind of generosity, one wonders if he will survive the next round of Des’ job cuts.

After all, that’s how the Desmond titles stay profitable, and profitability means just one thing: another Benchmark of Excellence.
Posted by Tim Fenton at 13:27