Not even a Parliamentary recess is sufficient to keep some of the self publicising quiet, and certainly not (yes, it’s her again) Tory MP for Mid-Narnia Nadine Dorries, who has read a piece by clueless Telegraph “expert” on USA politics Tim Stanley (who you can tell as he’s a doctor), and has felt the need to tell the world about it, as it’s all about her political heroine Sarah Palin. 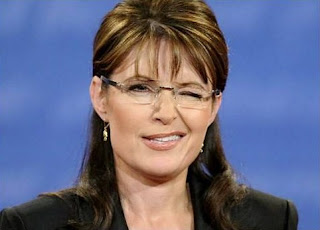 The former half-term Governor of Alaska wisely made the decision not to run for the Republican nomination for the 2012 Presidential contest – thus denying all good sceptical Palin watchers the opportunity to experience the kind of gaffes and howlers that would have put Mitt Romney well and truly in the shade – but to continue raking in the dollars from Fox News Channel (fair and balanced my arse).

But Stanley – and one has to presume Dorries is in agreement, such was her enthusiasm for the article – is sure that, despite her not having any status within the GOP, nor having held office of any kind since resigning her Governorship early, Palin must have some kind of role in the upcoming campaign. Why this is, unless Romney was to offer to put her on the ticket again, is unclear. 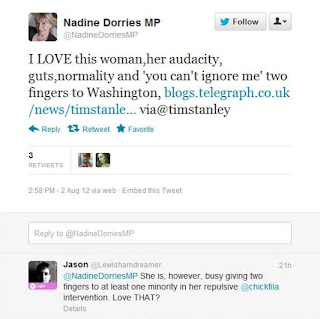 
Stanley suggests that Palin is as much a part of the GOP as Bill Clinton is of the Democrats, but this is a ludicrous comparison: Clinton was President for two terms, and continues to serve the Obama White House, while Palin has done little more than serve as a Fox pundit. While it’s not inconceivable that Romney might offer her the Veep nomination, there’s no other reason for her to feature. 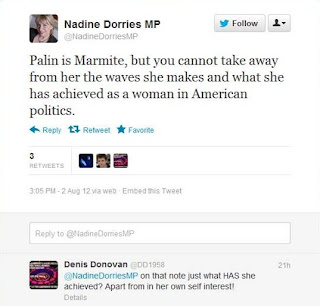 There are plenty of staunchly Conservative alternatives: Michelle Bachman, for one, is a serving member of Congress. Rick Santorum was a two-term Congressman and two-term Senator. Tim Pawlenty served eight years as Governor of Minnesota. Heck, there’s even Rick “Oops” Perry, who is the longest continuously serving current US Governor. Why does Palin have to feature?

Part of the answer is down to Stanley’s sheer cluelessness, but part is also due to the projection of Palin as some kind of right-wing icon, the latter built from nothing more substantial than Roger Ailes’ reason he gave her that break on Fox News: “She was hot and got good ratings”. Not exactly your average justification for casting a vote in that direction, then.

But for Nadine Dorries, that’s what “achievement” means. Funny old world.
Posted by Tim Fenton at 14:40