Young Dave’s judgment hasn’t always been as jolly good as Tory Party spinners might have you believe: quite apart from the suggestion that he jinxed a number of Team GB during the recent Olympic Games, he’s also not displayed the soundest of touches when it comes to giving his approval to think tanks. Some time ago, he let it be known that his favourite among these was Policy Exchange. 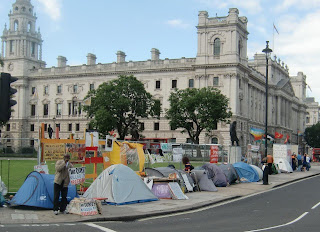 At the time, this may not have seemed a controversial move, and in any case, the group had at one time been chaired by the reliably conservative “Oiky” Gove. But then came a “report” by Tim Leunig asserting that regeneration out in those ghastly northern provinces had failed, and that the hoi polloi should be moved forthwith to somewhere convenient for London.

Cameron very quickly realised that Policy Exchange was not merely a repository for the totally batshit, but also a proverbial hot brick of a liability, and swiftly dropped it. At this point the thought might have entered the supposedly massive and intellectually superior heads of those at the organisation that a swift tacking away from the batshit towards the sensible might be in order.

But that thought would have been misplaced, because today has brought yet another excursion into the territory of the terminally batshit with another “report”, this one titled “Ending Expensive Social Tenancies” [.pdf]. This holds, roughly, that social housing in “expensive” areas should be flogged off to those bearing lots of the folding stuff and the occupants sent somewhere cheaper.

The economic rationale behind the “report” is that the money garnered by thus flogging off the social housing stock could then be used to buy lots more new social housing in those cheaper areas, thus kickstarting a housebuilding boom. It all looks so simple – too simple, in fact. Quite apart from the thought that this is gerrymandering and ghetto creating, there are other economic considerations.

If you clear the less well off from “expensive” areas, like, oh I dunno, all of Greater London, you also remove many of those who perform less well paid work there. So if businesses can’t get labour at the current rate, they either pay more and have to increase their prices, or they cease trading. So the Loadsamoneys left in their reassuringly expensive ghetto have to pay more and get less.

Of course, the less well off that got dumped out of town could be transported in every day to carry on doing that less well paid work, but the cost of commuting will also ultimately drive up prices – and that assumes the rail and road networks can cope with the additional demand. So while the Policy Exchange swings make money, the roundabouts elsewhere lose it in shedloads.

And thus reality intruded on the fantasy world of Policy Exchange.

[UPDATE 1245 hours: the Policy Exchange recommendation has been welcomed by Housing Minister Grant Shapps, who stated "It is blindingly obvious. And only a perverse kind of leftwing dogma that appears indifferent to the suffering of those languishing on record waiting lists prevents this kind of common sense from prevailing".

The common sense advocated by Shapps somehow manages not to notice the obvious shortcomings in this idea (see above), and also fails to explain how he can be available for comment when he is making so many individual decisions on who to follow or unfollow on Twitter. Yesterday, for example, he unfollowed a whopping 1,310 accounts.

So Grant Shapps is not only being witless and selective with his facts, but he is also able to stick two fingers up at something so troubling and trivial as the space-time continuum. He is a truly exceptional individual]
Posted by Tim Fenton at 11:23