The dreadful standard of journalism, and the cheap and nasty nature of the copy offered by the papers under the less than benign control of Richard “Dirty” Desmond has been brought into sharp focus today, as the Express has blatantly lifted its front page lead from yesterday’s Sun, with the Daily Star reduced to recycling the story of a couple who won the lottery (and not Des’ lottery, either). 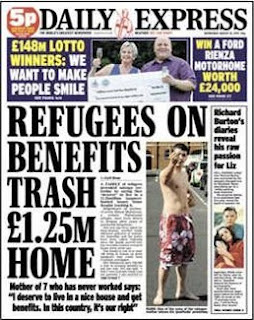 The Express splash even re-uses the photo that is currently displayed on the Sun’s website, so I hope that Rupe’s downmarket troops have pressed for at least an acknowledgement (not that they’ll get it from the Desmond press). On top of all that, the most remarkable mixture of smear and howler has been perpetrated by Star showbiz hack Nigel Pauley against the deeply subversive Guardian. 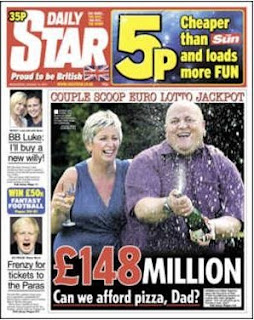 Pauley, who has been described to this blog as “A nasty little man”, has been distracted by another effort by right-wing group rantfest The Commentator to smear the hated BBC. Robin Shepherd’s assembled cast of dishonesty peddlers followed their pals at the so-called Taxpayers’ Alliance (TPA) and resorted to using the results of a Freedom of Information (FoI) fishing expedition against the Corporation.

These revealed that the Beeb was buying in around 200 copies of the Guardian a day on average. The focus, though, in true TPA style was the Very Big And Scary Number of 60,000, this being the number over a ten month period. This was then held to prove left-wing bias, but was complete crap, as those of us conversant with The Commentator know from experience. 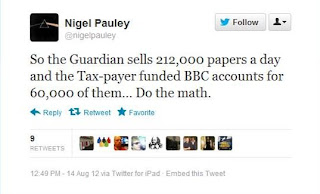 To get any kind of a representative handle on such an exercise, the newspaper preferences of all staff would have to be taken into account. They have not been. Nor do we know whether the Beeb gets any free copies of any other papers: The Commentator didn’t get that information, and nor did it tell its readers. But, as Clive James might have said, I digress. Let us return to Nigel Pauley. 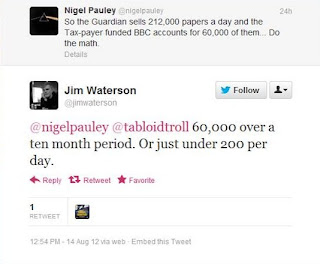 The Star’s showbiz man took the 60,000 figure and asserted via Twitter that this meant the Corporation was buying a significant slice of the Guardian’s daily print run. The implications for the Daily Star, where there are few sub-editors looking in following yet more of Des’ job cuts, will not be lost on industry observers. Only after he had the howler pointed out to him did Pauley realise his error. 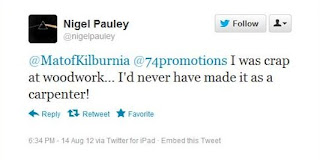 “I was crap at woodwork ... I’d never have made it as a carpenter” he Tweeted later, in an attempt to lighten the mood. Have I got news for you, Nige: you’re crap at journalism too. And if it weren’t for the Daily Star, you wouldn’t have made it in that profession, either.

But in the land of Dirty Des, that kind of rubbish hackery means only one thing (until the next round of cuts): Another Benchmark Of Excellence.
Posted by Tim Fenton at 15:05