Understanding Northern Ireland – Or Not

Nick Ross, for so long the lead presenter of BBC Crimewatch, studied at Queen’s University in Belfast, and began his reporting career just as what we now call The Troubles kicked off. Ross was later at pains to stress that, the more he looked into the whole sorry business, any idea that there were good guys on one side and bad guys on the other went out of the window. 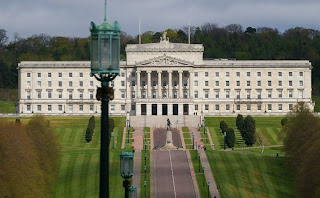 In situations such as that, nobody, Army or Civilian, Catholic or Protestant, Police or Paramilitary, ended up covering themselves with glory. And after the hostilities gradually wound down in the wake of the Good Friday Agreement, with the political process taking over from any idea of a military campaign, there was still unease, still tensions, and still some folks up for a scrap.

After so many decades of polarisation, the healing process has been a long one. It will continue so to be. And it is in this context that The Queen made her visit to Ireland recently. Then, the leadership of the nationalist Sinn Féin declined to attend. This move backfired on them. Having acknowledged the error, deputy First Minister Martin McGuinness will meet Her Majesty today in Belfast.

The meeting is laden with baggage even before it starts. McGuinness was in the early 1970s a commander in the Provisional IRA, the organisation that in 1979 murdered Lord Mountbatten, an act that repulsed the local community so much that they shopped the culprits to the Garda. The significance of the meeting is reflected in a thoughtful (and recommended) piece by Paul Bew in the Telegraph.

Lord Bew, who is professor of Irish politics at that same Queen’s University in Belfast, believes that Sinn Féin also need to go further, perhaps considering overcoming their reluctance to taking their seats in the House of Commons. After all, they now have five MPs. This measured and constructive tone is, sadly however, not reflected elsewhere in the Fourth Estate.

Because over at the Mail, Andrew Pierce is screaming “Has anyone asked the Queen if she wants to shake hands with McGuinness? Let's hope she has disposable gloves”. It’s all the fault of those rotten politicians, you see. The thought that Her Maj might be capable of taking initiatives herself is not allowed to enter: instead, there is a welter of abuse directed at McGuinness.

“Double dealing politician ... terrible man ... money grabbing ... lily livered ... dishonest thug ... disgusting, dishonest, debased little man” whines Pierce, who manages to work in a totally irrelevant reference to Nicolae Ceausescu, and then foul up his dates (he was shot dead 11 years after meeting HM, not 15), in addition to the signally dishonest act of projection.

Fortunately for all in the UK, the Mail and its hacks don’t make policy decisions.
Posted by Tim Fenton at 11:18