As the “O” level debate continues, we are constantly being told that these were somehow “more difficult” to pass, that less pupils passed them, and that they were a more challenging test. From this it is then assumed that anyone passing the “O” level examination in any particular subject is instantly endowed with the skills that will satisfy the needs of even the most discerning potential employer.

And as I’ve already pointed out, much of what has been said in support of these mythical examinations is not founded on anything that could be classed as evidence. To support my argument, the mystical art known as “five minutes’ Googling” is all that is needed, and here I turn to a piece written by Anthony Seldon for the TES back in 2008: it’s all explained there. 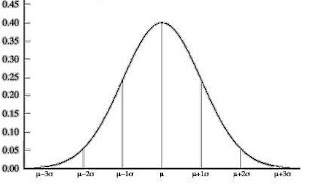 One very important item in the Seldon article may not be apparent, and it needs stressing, so I’ll digress momentarily to explain it. As he tells, marking of “O” level papers was normative, and this – not the ease of answering questions – explains why the proportion of pupils getting top grades did not increase over time. Because a normative approach means it can never increase.

How so? Well, in The Good Old Days (tm), the use of the Normal Distribution meant that only the top few percent received a distinction in School Certificate parlance (or Grade 1 or 2 at “O” level, or “A” Grade at GCSE). The next two (much larger) chunks of the distribution got a credit (or Grade 3 or 4, or “B” Grade), with the next two getting a pass (or Grade 5 or 6, or “C” Grade). All the remainder failed.

So if there was a particularly good year, you had to do better than average to pass, and vice versa for a less good one. GCSEs are marked to criteria, so there is no restriction on the number who can get a particular grade. This should be borne in mind whenever a pundit rants about “grade inflation”. Better results do not mean that exams are getting easier. The comparison with “O” levels is simply misleading.

Moreover, as Seldon explains, teachers are that much better nowadays at preparing pupils for exams. Sure, coursework and the ability to take exams in “chunks” makes things more straightforward, but the old days of effectively guessing what was going to be in the exam paper – usually by checking out old papers and using the law of averages – are long gone.

And, before the frothers and ranters line up to denounce Anthony Seldon, it should be noted that he is not some bit-part player in the field of education, but the Master of Wellington College, Berkshire, a leading independent school in the Rugby Group. One is tempted to allow the thought to enter that he would be better placed than “Oiky” Gove and his colleagues, and their press friends, to comment.

What you will not see in the right leaning press and blogosphere right now.
Posted by Tim Fenton at 16:32

Is it overly paranoid to think of this as being at best a pointless Daily-Mail-crowd-pleaser, and at worst a prelude to gutting free-at-point-of-use State education after the most basic GCSE/O-Level/Standard-Grade level?

Of course the switch to a criterion-referenced exam system happened under that notorious left-winger ... Keith Joseph.