Recently I cautioned against taking the wrong inference from lower prices for gas in the USA, and noted that the talking up of shale gas production by the likes of James “saviour of Western civilisation” Delingpole was based on little more than an article by an industry lawyer that he read at The Register. But right leaning sources keep pushing this angle, the latest being Matthew Sinclair. 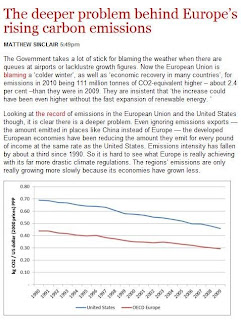 The head non-job holder of the so-called Taxpayers’ Alliance (TPA) has contributed a typically slanted and pejorative-laced piece for the Spectator, where he constructs a magnificent strawman – yes, the kind of thing that he’s always accusing others of doing – as he talks of Europe (presumably this means “EU”, given the TPA antipathy for it) having “far more drastic climate regulations”.

Far more drastic than what? And where? He also tells that “the developed European economies have been reducing the amount they emit for every pound of income at the same rate as the United States”, but this is misleading. The proportionate reduction – about a third – is indeed the same, but the amount is 0.23kg CO2/$ ppp for the USA and just 0.14kg CO2/$ ppp for Europe.

Indeed, why Sinclair even includes this is a mystery. The USA is starting from a far higher level, and even by 2009 had not reduced its emissions to the 1990 European level. Then he says “Supporters of continuing European exceptionalism in climate policy need to be able to show much more impressive results than that”. Why? What “exceptionalism”? What point is he trying to make?

But those of us who have observed the TPA previously know what is coming. It’s an attack on renewables, or in Sinclair-speak “prohibitively expensive solar installations and offshore wind farms” which “add to energy prices at a time when families have huge pressure on their finances”. This from the person whose best guess at calculating the cost of renewable energy is to say “costs twice as much”.

So that there is no reliable example of comparative costs is not surprising, with the only assertion being “British policy continues to diverge from the international norm”. It does? Moving towards more self sufficiency is to “diverge from the international norm”? Well, he also asserts “our current set of energy and climate policies will almost enforce high energy prices here relative to other countries”.

“Almost enforce” something? And inferring that a “possible” gas surplus might occur in future means it will occur is yet more sleight of hand. This is just another lame attempt to rubbish Government policy as a way of kicking Government. It’s a standard TPA tactic, it rests on selective interpretation, and is otherwise underpinned only by Sinclair’s own equally lame book.

But Spectator readers will lap it up, so that’s all right, then.
Posted by Tim Fenton at 15:29