Credit where credit’s due: today’s Express front page splash, which talks of information “emerging yesterday”, is correct. One may allow oneself a brief period of rejoicing, as Winshton once put it. But what is yet more interesting is that, once again, this story was first published elsewhere, lifted, and recycled with the usual rent-a-quote talking heads, before emerging as supposedly “real news”. 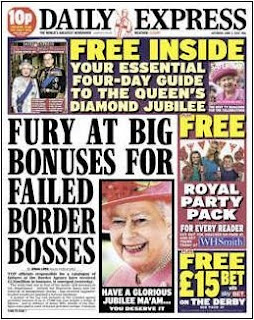 “Fury At Big Bonuses For Failed Border Bosses” screams the headline. While the piece is factually correct, in that a number of Civil Servants at the UK Border Agency (UKBA) received performance related bonuses during the past year, what Dirty Des’ finest don’t let on is that they were, once again, well behind the curve with the news, which had actually “emerged” yesterday lunchtime.

And first to the punch were the Independent, which also pointed out that just 1.7% of the salary bill had been paid in bonuses versus Cabinet Office guidelines of 5%, and the Maily Telegraph, which described the UKBA as “troubled” and felt it necessary to remind its readers of “border controls” and (to no surprise) “asylum seekers”. These were not the only freely available online sources running the story.

The Huffington Post UK also had the news, though Dina Rickman’s piece was rather judgmental for that site, telling of bonuses paid “despite failings”. The foot soldiers, in Ms Rickman’s world, are clearly to blame when the management fouls up. The Guardian also ran the story, and to its shame also used the term “troubled” as well as describing bonus payments being “pocketed”.

That last is the kind of borderline pejorative language more likely to come from the so-called Taxpayers’ Alliance (TPA), which takes us back to the Express version. Having had several free-to-view sites giving different versions of the UKBA bonus payments, the Desmond press just had to copy and paste – and there was their next day’s front page lead, at next to zero cost!

All that was needed was to ring round a few talking heads to get a quote, and this too did not impose an unduly onerous overhead. Readers receive the benefit of the wisdom of James Clappison, who succeeded Cecil Parkinson as Tory MP for Hertsmere and is otherwise barely visible at Wesminster, save for a brief appearance in the MPs’ expenses business.

Clappison stupidly infers that bonus payments be subject to public vote, which would stop the payments but cost several times more. The Express also gets quotes from usual suspects Mark Reckless, whom we have encountered previously, and Emma Boon of the TPA, who reads from her book of approved quotations. And that is how the Express puts out a front page story at very little cost.

Which means one thing: another Benchmark Of Excellence.
Posted by Tim Fenton at 11:29