“Now EU Vote Is A Step Closer” thunders the banner headline on today’s Daily Express. The sub-heading “Referendum ‘top priority’” reinforces this certainty. But, as Express watchers know all too well, the substance of the supporting story does not match up. In fact, all the story does is show that Dirty Des’ finest don’t have a clue what is happening. At all. 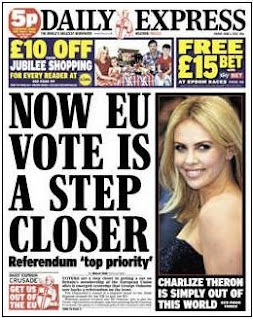 “Osborne Backs Call For Referendum” readers are told. Ho yus. And where did this come from? It apparently “emerged yesterday”. It did? Well, no it didn’t: the Express cadged this from a piece in the Mail last Tuesday, which said “Chancellor George Osborne is believed to be encouraging senior ministers to make their views known on the issue”. So they don’t know.

So that’s the central premise shot to bits. But never mind, maybe there’s a nugget of fact buried away in the pile of bovine by-product. “Mr Osborne is understood to be arguing ...”. You don’t know. Next? “Mr Osborne is thought to favour a poll for renegotiating the terms ...”. You don’t know. “Ukip deputy leader Paul Nuttall said last night: ‘It seems the Chancellor is a late convert ...’”. Neither does he.

“Downing Street insiders confirmed the possibility of a referendum was being discussed ...”. And they don’t know. “One senior source said: ‘We are thinking some strong Tory thoughts on Europe’”. He doesn’t know either. “Aides insisted Mr Cameron’s Eurosceptic instincts are partly being restrained by the Euro-fanaticism of Nick Clegg and the Lib Dems”. Now you’re just making it up.

“Mr Osborne is understood to be concerned that Labour is plotting to outflank the Tories by promising an EU vote”. You still don’t sodding well know. “Treasury insiders yesterday declined to deny reports the Chancellor is arguing in favour of a referendum”. And neither do they. And save us this “poll of Tory members” crap. By that logic there would be a death penalty call in the next party manifesto.

Is there any actual fact in this story? “Whitehall insiders say ...”. Christ on a bike, you haven’t a clue, Express people, have you? “Mr Osborne is thought to see London Mayor Boris Johnson ... as a potential rival”. I was right, you really haven’t got a sodding clue. So “It means the second most powerful figure in the Government is behind the call to give voters a say” means you don’t know.

The article is based on a blatantly false premise, it’s hedged so much that it would wear out anything in the Black and Decker product line, and Macer Hall should be ashamed to put his name to it. But it cost next to nothing to cobble together, and follows the Desmond agenda, while frightening enough gullible punters into spending their hard-earned cash on it.

And we know what that makes it: another Benchmark Of Excellence.
Posted by Tim Fenton at 12:52