As the right leaning part of the Fourth Estate, whose senior hacks and editors have never been near a state secondary school in their lives, continues to lionise Michael “Oiky” Gove over his move to reintroduce a system of examination that failed at least 75% of the country’s pupils, a look at the Conservative commentariat is instructive, if all too predictable and wrong headed. 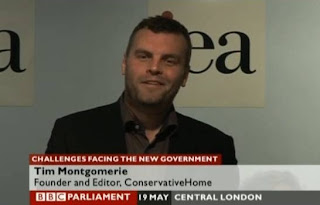 This is facilitated by the preposterously puffed-up Simon Heffer, now editor of the e-dustbin of ranting and frothing otherwise known as RightMinds. The Hefferlump has given ConservativeHome stalwart Tim Montgomerie the opportunity to hold forth, and thus his supremely misguided piece titled “At last, a politician who’s brave enough to tell the truth”.

Monty, who was too young to sit “O” levels, is nevertheless all in favour of them. This, he believes, will raise educational standards. The inconvenient fact that the exam was only ever sat by 25% of pupils, many of whom failed one or more subjects (there was always the option of the dreaded “autumn re-take”, of course) is not allowed to enter. Nor is the knowledge that the CSE had no credibility.

A CSE Grade 1 pass was intended to be equivalent to a pass at “O” level, but in practice, employers and those in charge of higher education considered the exams to be worthless. Secondary Modern schools, at whom the CSE was mainly targeted, got their brightest pupils to sit the equivalent “O” level, knowing that only this exam held any value. And that’s what Gove wants to bring back.

But Monty does not dwell on such detail. Instead he obsesses over the EU, and talks about telling “the truth” about it, which means a version of the facts that meets with his approval. He repeats the tired canard about the UK not being independent of that strange alien presence known as “Brussels”. And he wants more airports, nuclear power stations and of course more roads.

That particular take on the country’s needs is what drives Monty’s belief in a return to a system that a Government led by his great heroine Margaret Thatcher did away with. And on this subject he has clearly been reading too many rants by Melanie “not just Barking but halfway to Upminster” Phillips: “We started to hand out good exam results like sweeties”. Good to see he hasn’t been doing his homework, then.

All he then needs is to talk of people on benefits, throw in a reference to the Soviet Union, say “dumbed down”, and he’s done. And that’s not good enough: Gove, a former hack, has deliberately and calculatingly fed the press beast what its editors and owners want to hear. Montgomerie could at least have engaged brain before commenting, but instead has produced a slice of Pavlovian slavering.

So that’s Monty for the dreaded “autumn re-take”, then. No pass grade for him.
Posted by Tim Fenton at 11:47