For those negotiating the terms of the UK’s departure from the EU, push is coming to shove with the certainty of night following day, as is the realisation that, whatever the fog of propaganda put up by the right-leaning part of the press, the Brits have the weaker hand. But whether in the mainstream press, or on social media, there are many determined to cling on to the belief that voting Leave was the right thing to do. 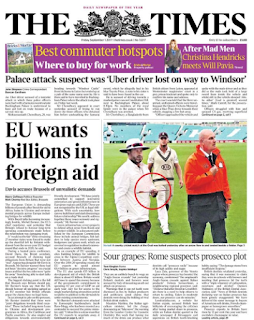 Never mind that the UK has been able to enjoy a uniquely beneficial EU membership deal, in the Single Market and Customs Union, able to leverage its financial sector but able to remain outside the Eurozone, opting out of Schengen but with access to EU security data, and still holding on to part of Mrs T’s rebate from all those years ago. No, that is of no consequence to the Leavers, who now want to have their cake and eat it. 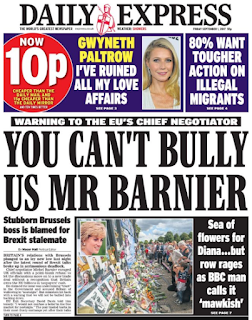 But while the Murdoch Sun happily propagandises “Michel Barnier and his EU team truly do excel in being the most inflexible and arrogant bunch of people going … This week has shown up the EU Brexit negotiating team for what it really is - naive and ill-judged”, disgraced former Defence Secretary Liam Fox, after whining about being “blackmailed” by the EU, was told in no uncertain terms by one former senior Civil Servant to “get a grip”.

David Davis and his team have suggested the UK pay nothing to the EU after 2019, only for Michel Barnier to counter that Britain had made commitments to a whole series of projects that run well after that date. The reality is that, while out allegedly plucky negotiators challenge every item in the “divorce bill”, Davis and his team either don’t know what they’re arguing over, or they’re just coming it. 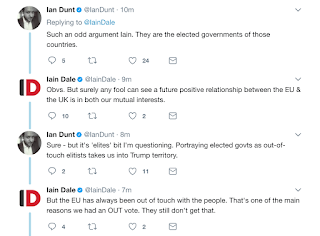 In the social and new media world, the propagandists are faring no better: the perpetually thirsty Paul Staines and his rabble at the Guido Fawkes blog hilariously claimed that Fox’s idiocy was “gaining traction”. And The Great Guido has the brass neck to call Fake News on others. And on Twitter, poor Iain Dale is still saying whatever EU-bashing things he can muster, without realising that the UK is in trouble - entirely avoidable trouble. 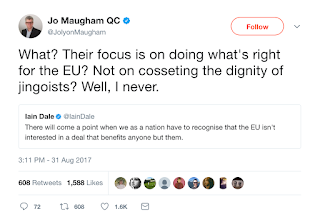 Complaining that the EU 27 will do a deal that suits themselves first is the kind of statement of the entirely bloody obvious that should not need to be made. Blaming “élites” is as foolish as it is pointless (who’s the “élite” anyway? A paid-up member of the Pundit Establishment complaining about “élites”? Pull the other one). The amount of delusional behaviour on display is frankly embarrassing. 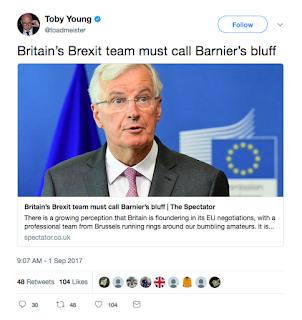 Brexit will either happen mainly on the EU’s terms, or with no deal. It will be a less than satisfactory outcome, or a totally disastrous one. Neither can be talked up by glibly telling of “a global Britain”, citing “freedom”, denouncing the “shackles” of EU membership, or otherwise revisiting that Vision And Boundless Hope And Optimism. Sterling is on the floor, jobs are migrating - permanently - and our negotiating team is out of ideas.

But they’re very good at challenging the divorce bill, and feeding the Europhobic press, so that’s all right, then.
Posted by Tim Fenton at 10:50

Think of all the 5kW vacuum cleaners we'll be able to sell globally post-Brexit.

At what point do you think our Government, the Toryboy Brexiteers and all those Brexit cheering pundits like Young and Dale will clock onto this simple reality?

I wanted (and still want) us to remain.

But if I was an EU negotiator I would have a non-bullshit message for Britain: "Comply with the agreement you signed up to and meet your financial obligations. And while you're at it - get fucked." Which is why I'm not a negotiator, though the actual message is the same but wrapped up in diplospeak sophistry.

And Yes, there IS an "elite" in the EU, just as there's an "elite" in Britain and the USA. They're called "bankers", in the EU case it's the European Central Bank. That's the same gang which ruined the economies of Portugal, Ireland, Italy, Greece and Spain and reduced many millions of Europeans to poverty. In the US case it's called the Federal Reserve. In Britain it's called the Bank of England.

Actually, "elite" is the wrong term. It should be "thieving gobshites".

Which is why I'm a reluctant Remainer: We can only get rid of the thieves if we band together across Europe and lock the offenders up for life. Until we do they'll go on robbing from and destroying communities and whole countries. It's all they've ever done and ever will do.

Meanwhile, Britain out of Europe will mean only that the British version of thieving gobshite will link up with the Yank version and loot what's left of Britain's national assets. Think "Perpetual Austerity" and "Privatised NHS" for what that means.

This is called "Realpolitik".