Those out there on the far right are hot on terrorism. They want to see the full force of the law brought to bear on anyone who so much as thinks about involving themselves in acts of terrorism. Prison, we are constantly reminded, is too good for these people: being locked up and having the key thrown away is the least they can expect. So when the Police nicked eleven men on suspicion of terrorist acts, they should be happy. 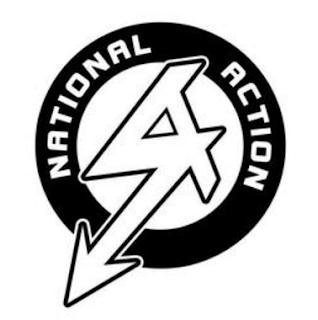 But, sadly, not only are the far right not happy that, as Hannah al-Othman at BuzzFeed news has put it, “Eleven men have been detained under terror laws in coordinated raids across England and Wales”, they are not even commenting. For the likes of Battersea bedroom dweller Paul Watson, aka Prison Planet, and Stephen Yaxley Lennon, aka Tommy Robinson, this was a non-event. For them, it didn’t happen.

Why this might be can be explained better by Ms al-Othman’s headline: “11 Men Have Been Arrested In Police Raids As Part Of An Investigation Into A Banned Far-Right Group”. The Independent can tell us exactly who that group might be. “National Action: 11 suspected members of banned neo-Nazi terror group arrested in England and Wales”. National Action has been proscribed since last year.

And as Dominic Casciani of the BBC noted, “Six of them are also being held on suspicion of preparation of acts of terrorism - one of the most serious counter-terrorism offences … And five of the six from the North West are also suspected of terrorism fundraising”. What appears to have been stopped in its tracks is something organised and very dangerous.

But out there on the right, there is silence. Nothing from Nigel “Thirsty” Farage or his pal Arron Banks, not a peep from pro-am motormouth Katie Hopkins, no sound from the convocation of the irredeemably batshit otherwise known as Breitbart, nothing from Doug Murray The K, zilch from UKIP leadership hopeful Anne Marie Waters.

Anyone would think that this assembly of less than totally august beings was only interested in terror threats that came from Scary Muslims (tm). Or perhaps these arrests were just coincidence, and those nicked were all “lone wolves”. Like the bloke who murdered Labour MP Jo Cox. Terrorism by white people isn’t quite the same for them.

Too many on the far right have double standards on terrorism. That’s not good enough.
Posted by Tim Fenton at 10:48


"Too many on the far right have double standards on terrorism."

The have double standards on everything, to be fair, not just terrorism.

Still I'm sure the Daily Mail / Sun would also be covering it complete with "Continued on pages...", and letting us know where those arrested went on holiday (if somewhere foriegn), where they worpship, some tenious link to Corbyn, if they bought anything on Amazon, and of course, the Daily Mail exclusive of how much their houses are worth.

"Too many on the far right"?

Yes, I'm looking at the Daily Heil, the Scum, all the other Murdoch/Rothermere lickspittles, plus the usual broadcast mouthpieces. Detritus all.

The lot of them bring nothing but shame on this country and what's left of its "culture".

We all know where it leads eventually. There are no excuses remaining.

Looks suspiciously like the BBC News logo during the despised Thatcher era. Which looked like SS runes......