For many pundits observing this year’s Labour Party Conference in Brighton, and for the Guardian’s Gaby Hinsliff in particular, one story has come to encapsulate the divisive and aggressive nature of politics in the social media age - that BBC political editor Laura Kuenssberg has, reportedly, had to hire a bodyguard. This, we are told, is as a result of threats made against her by unidentified Rotten Lefties (tm). We then saw images of Ms Kuenssberg in close proximity to a man described as an “ex-soldier” who works in a security role at the BBC. This was held to confirm the story. But then, reports came in that she had been seen outside the Conference venue alone, or if in the company of others, none of the others was the alleged bodyguard. 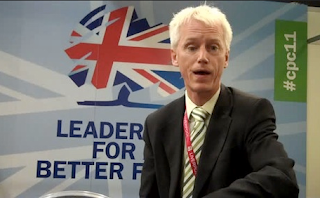 David Wooding - down to the usual level of Murdoch reliability

Now, none of what follows excuses or otherwise defends threatening behaviour by any individual or group against anyone else. What this post is trying to find out is whether the original story was reliable - or, indeed, whether it has been independently stood up by anyone else, given that the BBC, understandably, declines to comment on such matters. 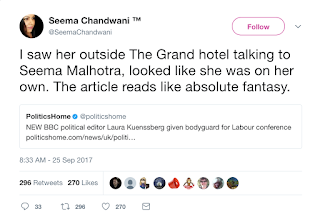 So let’s start at the very beginning, as it’s a very good place to start. The claim was made in the Sunday edition of the Murdoch Sun by its political editor David Wooding. His source for the headline “BBC hires bodyguards to protect Laura Kuenssberg at Labour conference after leftie threats”, and claiming “The Beeb is insisting she must have personal protection both inside and out of the secure zone at the four-day Brighton rally”? 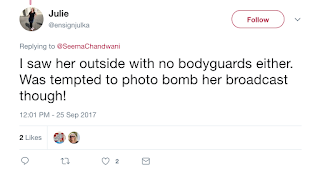 Wooding’s “source”, such as it is, is the old Sun favourite, “an insider”. “An insider said: ‘We take the safety of our staff extremely seriously. Laura is a well-known public figure. She and her team will be covering events with big crowds where there can be hostility, so we want to ensure adequate precautions are taken’”. An anonymous single source.

This is remarkably similar to the claim made by Charles Moore in the Spectator about Ms Kuenssberg’s reporting of June’s General Election, where he told “the BBC never reported that Kuenssberg was so badly threatened online by Corbyn supporters that she was given personal protection”. That was an anonymous single source, too. 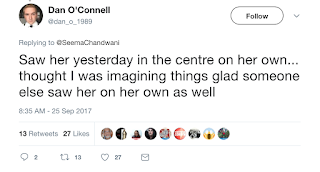 Some who are attending Conference were not convinced by the bodyguard claim. Seema Chandwani was one of them: “I saw her outside The Grand hotel talking to Seema Malhotra, looked like she was on her own”. A Tweeter called Julie was another: “I saw her outside with no bodyguards either. Was tempted to photo bomb her broadcast though!”

Pamela Fitzpatrick observed “What rubbish. I saw her happily walking along the street today chatting. No body guards & no one bothered her”. Dan O’Connell replied to her “Saw her yesterday in the centre on her own ... thought I was imagining things glad someone else saw her on her own as well”. And Mrs Angry of Broken Barnet fame added “She was with him in the London room yesterday chatting casually. He seemed like a media guy”.

All of which at least suggests that someone in our free and fearless press might have been best advised second sourcing a story from a less than totally reliable source, rather than taking it as data and resorting to reams of why-oh-why comment. After all, isn’t journalism what journalists are supposed to be about first and foremost? Just a thought.
Posted by Tim Fenton at 10:40

Now why, just WHY, would anybody on the left want to threaten such a bar of soggy soap as Kuenssberg?

After all, everybody knows what the crooked mouth propagandist is all about. Which is herself usually. Best leave her to stew in her own weirdness.

And as for Wooding's "source" - assuming he/she wasn't bribed in the usual Scum way - it could easily have been just another Beeb News ranting righty. God knows there's enough of them. So many, Beeb News has become as much a laughing stock as the rest. Wooding is merely another Murdoch gobshite.

No, there's no excuse or need to threaten anybody, let alone a media poltroon like Kuenssberg. The right are doing a good self demolition job as it is. Though you can safely wager the New Labour rump will exude their usual hysterics.

It all smacks of the phony saga of the Eagles Broken Window and the Sobbing "Threatened"MP. The same old shite from the same old "source".

Bet the Friends at Vauxhall Cross are made up though. And the Brit desk at Langley.

Two points 1. The journalist should not become the story 2. Why the complete lack of discretion ?

What is disturbing is the Guardian opinion piece that treats the bullshit story as if it is factual.

Jobovitch - Nothing disturbing about it. It's entirely predictable.

Since placewoman Viner moved in what remained of "liberalism" moved out. The Grauniad's been garbage ever since.

(That's "liberalism" in the original meaning of the word, not the abortion that is "neoliberalism".)

Newton Dunn's sticking by his claim, if this tweet is any guide.

Maybe they threatened to ask her a question back about her close links to the Tory Party and the bias of the BBC.

So it would appear from Newton Dunn's picture (link above) the bodyguard is not to protect Kuenssberg from the Momentum crowds, but only when Jeremy Corbyn gets near her.
About the only MP in 100 years to have been assaulted by a fellow (more right-wing) MP within Parliament.
Or maybe the bodyguard is there only for the cameras. To create " news".

A sort of Brit Julius Streicher. Like all his hard right chums.

The Canary have added their input, about Laura K's alleged listing to speak at Tory conference, just for balance sake?

Guido/Sun on one side Canary on the other. Fake wars anyone? Damian "Deza" McBride sacked in former times would be a hero today!