Time was when the centre-right ruled the British blogosphere, but that age is well and truly gone. The perpetually thirsty Paul Staines and his rabble at the Guido Fawkes blog sold out to their new masters in the press, Iain Dale scaled back his blogging in favour of more remunerative work, Phil Hendren aka Dizzy Thinks also got waylaid by paid work, and Conservative Home became a bit dull and parochial - like the Tories themselves.

Now, it’s the centre-left that hold sway, and many of those blogs are unswerving supporters of the current Labour leadership, as is the campaigning group Momentum. If only the Tories had their own equivalent … and so was born Activate UK.

“Activate: Tories mimic Momentum with grassroots campaign … New group draws inspiration from Labour as it tries to engage young people in politics” observed the Guardian, before sounding a word of caution. “but launch on social media has been widely mocked … The group’s use of multiple hashtags and a meme that was last popular in the early 2000s led to widespread derision on the social network”.

And did it sound dull! “Activate, which aims to ‘engage young people with conservatism’, has close links with senior party activists … The group’s constitution says it will be independent from the party, though all members are expected to be members of the main party … Activate’s website has a detailed constitution and code of ethics closely aligned to Conservative policy, including ‘promoting a global economic outlook’ and ‘making a success of Brexit’ - a line used directly by Theresa May”. Real snore-inducing stuff.

Activate got off to a difficult start, after its WhatsApp group was rumbled: “A young Tory campaign group has apologised after members posted sick messages about ‘chavs’ in a Whatsapp group … Vile messages sent in an ‘Activate’ group say things like ‘gas them all’ in relation to the working class stereotype of ‘chavs’” told free sheet Metro. 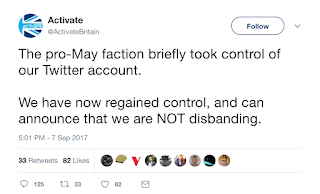 By this week, all was not well. The Guardian has reported “Tory Momentum clone Activate at war as 'hackers' back Jacob Rees-Mogg for PM … New grassroots campaign for young Tories has had a disastrous week on the internet, losing control of its social media accounts”. Whoever was in charge was endorsing Jacob Rees Mogg for leader.

That’s the same Jacob Rees Mogg who had the car crash interview on Good Morning Britain the other day. It was all too much: today, the Activate Britain Twitter account tersely posted “Activate has finally regained control of our Twitter account. We can now announce that we are officially disbanding”. Or were they? “The pro-May faction briefly took control of our Twitter account. We have now regained control, and can announce that we are NOT disbanding”. But then came a request to Twitter “How do we delete our account”.

The Tories’ latest attempt to emulate the success of the left-leaning blogosphere, and groups like Momentum, has been around for ten days, and it might as well not bother trying to go any further. It’s dead. Morte. It has no grassroots, no credibility, no idea how to engage its target audience, and no future.

Anyone would think the Tories don’t understand young people. I’ll just leave that one there.
Posted by Tim Fenton at 08:49

It isn't a question of "success in the blogosphere".

It's a question of trying to form a semblance of a fair and decent society. It's a question of how we rid ourselves of untrammeled corruption and greed which since 1979 has reduced this country to a pitiful, divided state.

This necessarily entails sluicing the political system until it is rid of the likes of Philip "I'm Rich You Know, And Fuck You" Hammond, May, Johnson, Green, Redwood, Mogg, Fallon, Shapps, Soubry, Benn, Field, Cable and all the others responsible for bringing us so low.

It will take many years to bring on worthwhile change. Along the way there will be betrayal, external interference, sabotage and yet more corruption - all of it couched in weasel words and the hypocrisy of "compromise". All of it will be assaulted by thoroughly rotten mainstream media. Anybody in favour of constructive change will be vilified by far right propaganda clerks not fit to clean a toilet.

Blogs are important as a tiny part of a build up to strong and lasting policies. But nothing more. Much more important is a sense of majority realisation that we cannot go on in this way, deliberately depriving our people and whole swathes of the country of fairness while toadying to insane permanent warmongers and suited-up thieves in the USA and elsewhere.

The tories, New Labour and LibDems have come to represent everything wrong and evil in modern life. They and the political and economic system they promote, lie about and defend have brought us to this state of affairs. Individually and collectively they are the guilty parties.

Nothing will change until moral decency becomes the norm, not an aim. And how long will that take? How much determination and staying power will be needed? The lesson of history is that those who make peaceful revolution impossible make violent revolution inevitable. How many more lessons are needed?

A governing Party of BluKippers with a secret society ECG(taking taxpayers money) within led by the nose (avoiding the whiffy odours) by the DUP (after use of taxpayers money bribes). And a compliant media, possibly with similar infiltration of supporters, to aid the deceptions.

Then there is a Party in opposition which has MPS, who vote in accordance with their constituents views, threatened with deselection.

The best Parliamnentary system in the world. Possibly. Not.

Transparency - who needs it?