Today in Crewe the weather is a bit grey and cloudy, but it is mild – temperatures are well above the mid-October average. And September went out with a mini-heatwave, just to confuse plant life following a lacklustre Summer. But this counts for nothing with the why-oh-why brigade, so a harsh Winter is being talked up already, and especially in the Express. 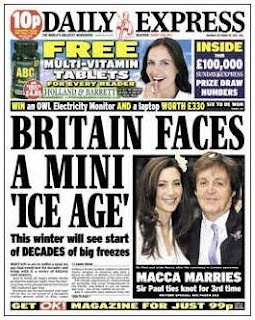 Where did they get that story? Er, from themselves

Why so? Ah well. Weather punditry – which is mainly about churning over press releases from a variety of forecasters – is cheap, and the Express is cheapness personified. Also, it’s attention grabbing and helps sell a few more papers. So the indulgence of the Express should surprise no-one, and nor should their creative reinterpretation of their source material.

This kicked off as early as September 20 – before the heatwave – as Nathan Rao told readers “Britain Faces An Early Big Freeze”. The iron law of Dacreland dictated that the Mail had to run an equally scary piece, both papers referring to “huge, swirly low-pressure systems” to emphasise their meteorological prowess. This, though, was a mere sighting shot.

So three days later came “Are We Set For A Long Cold Winter?” which contained the assertion “Last winter was the coldest in Britain for three decades”, which it wasn’t (2009-10 was colder overall). “After one sunshine bonanza at the end of next week ... it will be time to batten down the hatches” tells the Express. Well, that hasn’t happened yet.

Nevertheless, the stories kept coming: on October 8 the Express splashed on “-20C To Hit Britain”, with the news that snow had fallen on the highest peaks of the Cairngorms, meaning that the sea level temperature in northern Scotland fell one night to around eight degrees Celsius. Pope Catholic, bears dump in woods. So today we have “Britain Faces A Mini ‘Ice Age’” to really scare the readers.

This is backed up with plenty of hyperbole but no factual evidence – keeps it cheap – yet the Mail and Sun have piled in and run similar scare stories. But at least their copy looks reasonably original: today’s Express piece achieves something remarkable even for the Desmond press, and that is the churning over of its own back catalogue.

Much of the discussion of the La Niña phenomenon was recycled from the September 23 piece, right down to talk of Arctic ice, sea temperatures, and the quote from someone at the Royal Meteorological Society.