Defence Secretary Liam Fox has bowed to the inevitable, and has jumped, thereby saving Young Dave having to push him. All those shows of faux loyalty earlier this week in the Commons counted for nothing: the revelations about Adam Werritty and questions over who was paying whom for what, and what the various parties were getting in return, would not stop coming. 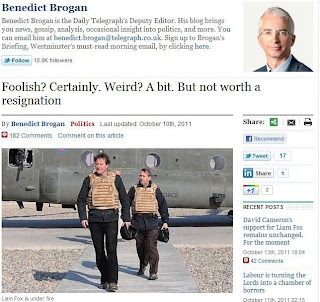 The inevitability – which I considered at the time – was, however, not universally accepted. At the Maily Telegraph, political editor Benedict “famous last words” Brogan – the man who said Andy Coulson had changes in store at 10 Downing Street, although he managed not to notice that those changes included Coulson leaving – concluded the matter was “Not worth a resignation”. 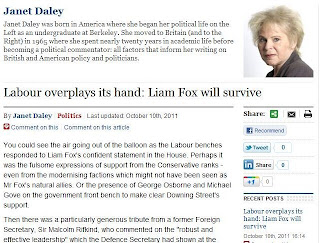 His colleague, the equally clueless hack Janet Daley, whose mugshot looks truly frightening, was in agreement: “Labour overplays its hand: Liam Fox will survive” she told her readers. “You could see the air going out of the balloon as the Labour benches responded to Liam Fox’s confident statement ... fulsome expressions of support ... generous tribute”.

Things did not get any better from those on the Government benches, as Nadine Dorries (yes, it’s her again) told the readers of her not-really-a-blog that Fox was “a good and decent man”, and that she would be in the Commons “to lend him ... support”. Sadly for Nadine, this intervention went the same way as her recent amendment to the Health bill. 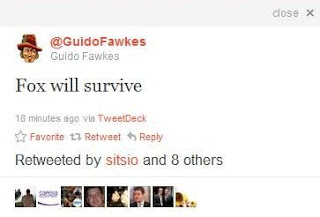 But the icing on the cake was provided by the perpetually thirsty Paul Staines, who styles himself Guido Fawkes. In a typically clueless moment of self congratulation, he Tweeted unequivocally “Fox will survive”. Several were persuaded to relay the words of The Great Guido. Sad to say, though, that the Curse Of Staines has struck again, as it did with Andy Coulson.

I would suggest that you remove the bizarrely petty and sexist remark about Janet Daley's appearance from this otherwise interesting article.

(If he weren't a sock-puppeting git and weren't so afraid to take mere criticism on the chin, fewer people would think this.)

See, I don't tend to make predictions because I'm usually wrong. And I don't gamble because I never win anything. Staines/Cole should have a word with themselves and stop making plain predictions like this. I guess Staines learned not to put money on this one, though.

Pity you won't acknowledge your lowly place in the world and bow down to your social betters, is it not, Timmy 1 or Timmy 2? "Independent mind," such a funny joke. :)

P.S. I got here via a leftist Twitter feed, so kindly leave your conspiracies at the door. :)

Conspiracy theory? Astro-turfing reality, more like. Paul Staines has played sock puppeting games far too often for anonymous comments to be of any real use to him beyond his own site (where the Kool-Aid flows like wine on a typical weekday in his kitchen). If Staines or anyone else is unhappy with any resulting imbalance (wahhh! but the lefties make anon comments, too!) he only has himself to blame. Ditto for any claims he might make about traffic figures. He poisoned those wells himself.

Wow, you're sounding a bit paranoid and unhinged there, Tim. Is it like that for all bloggers? Maybe a nice hobby would release all that pent-up aggression, like stamp collecting or drinking bleach.

Claiming that someone is paranoid based on something you imagine they must have said; is there even a word for that?