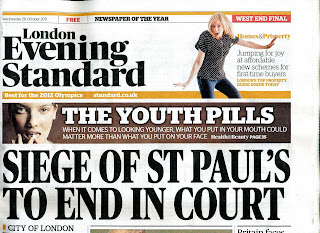 This is a truly stupid headline

Yesterday’s edition of the increasingly downmarket Evening Standard continued the press offensive against the Occupy London Stock Exchange protests, which are actually outside St Paul’s Cathedral, by prophesying “Siege Of St Paul’s To End In Court”. Thus the presence of a few dozen tents on the periphery of St Paul’s became something threatening and wicked. 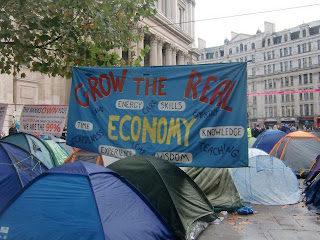 So what is the reality of this “siege”? Fortunately, I’ve been able to check this out first hand, and can show just how rotten and threatening it all is – or, as it appears, is not. For starters, here’s a view looking south across the east end of St Paul’s, showing an oppressive and dastardly banner proclaiming “Grow The Real Economy”, which is only mildly subversive. 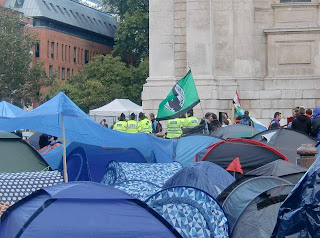 While, in the background, the Met and City Of London Police maintain a presence, although, as one City Officer admitted yesterday, “there isn’t anything we can do”. But there are indeed a lot of tents, although these do not block access to the East Door of the Cathedral. 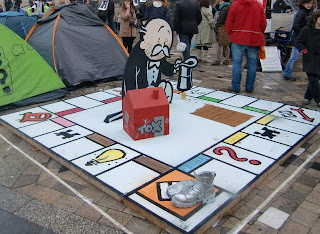 The novelty Monopoly board – which I hadn’t seen before – is well done, and the lack of publicity underscores that many hacks who write about the protest probably haven’t visited. And the story about Starbucks and laptops appears just that: there were some folks with laptops in the Starbucks, but it looked like the few hacks present had grabbed the best seats (near the window). 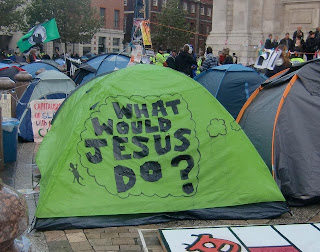 This photo, of the green tent by the Monopoly board, is included especially for the most righteous of the hackery, those whose papers who like to tell their readers how Christianity is under attack from aggressive secularism, commercialism, and usually the BBC. What, indeed, would Jesus do? 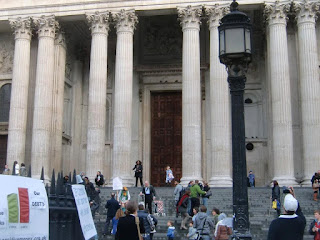 And in conclusion, here is the “siege” in action, in front of the Cathedral’s East Door. Except, as can be seen, there is no siege: the Standard is just full of wind and water, as is so much of the Fourth Estate. Far better that they, the Church, the politicians, and the authorities engage with the protesters.

Because maybe they’re on to something.

[UPDATE November 1: the loathsome Toby Young has now declared that the protesters are "bullying" the Church of England, that they are merely "preening narcissists" because some have celebrated Halloween, and that leaving the scene is "the right thing to do". Young also asserts that this protest will go down as "one of the least successful ... ever staged", which is interesting, considering all the similar actions going on across Europe and particularly in the USA.

Young does not demean himself by doing any serious analysis of why this and other protests have happened, and he will not. That, after all, is not what the bear pit that is Maily Telegraph blogland is about]

"What, indeed, would Jesus do?"

I suppose he would rebel against the establishment and start up his own new religion.