And so, as the distinctive sounds of Spiggy Topes and The Turds fade out (Shurely “Rolling Stones”? – Ed), the curtain falls on the life and career of the brutal, wayward, unpredictable and legendarily flatulent Muammar Gaddafi. The Mad Dog of Libya went as I suggested he would in February: “Think Romania, only worse”. There was no chance he would survive discovery.

Gaddafi’s death diminishes the threat of insurgency against the new order in Libya, but still, it would help the Transitional Council if the former leader’s sons were also apprehended – although, again, given their record of casual violence against their own citizens, the chance of them being taken alive is probably zero. Some behaviour is beyond forgiveness.

So now the West, still wanting access to Libya’s oil reserves, will have to forge a relationship with the new Government, whoever forms it, while in the meantime trying to keep in the background the inconvenient fact that their leaders were more than happy to do business with Gaddafi following his decision to renounce WMD in order to secure inward investment and other aid. 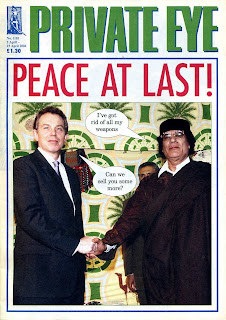 How happy were we to do business with Gaddafi? Look no further than Private Eye, issue 1103, where Tone is seen being welcomed at the Mad Dog’s “tent”. Pa Broon was there too, if later on. Our leaders were happy to do business with Hosni Mubarak, too, as well as being less than totally hostile to Bashar al-Assad in Syria, now hanging on to what looks like a failing state.

International relations is, rather too often, a grubby business. Successive UK Governments have done business with the Shah of Iran (a particularly brutal dictator), the military in Greece (the last time the CIA pulled off a coup on mainland Europe), and a variety of regimes with questionable attitudes to democracy and basic human rights.

The USA, wanting access to bases on the Azores, was particularly willing to pay Premier Antonio de Oliveira Salazar handsomely for the privilege, even including Portugal in the Marshall Plan, despite the country remaining neutral during World War 2. And nobody interfered with the hold of Francisco Franco on Spain until he slowly shuffled off in 1975.

Will things be better the next time around? We do not know, and nor can we expect any guarantees. We can only hope that the end of Gaddafi will bring the state of Libya to a happier place.