Being For Yet More Benefit Of Mr Lobby

The issue of right and libertarian leaning lobby groups is for some a very sore point, something that was brought into sharp focus today following George Monbiot’s challenge to them on transparency and accountability. Monbiot had already considered the transparency of many such groups and found it wanting, compared to those on the centre left. 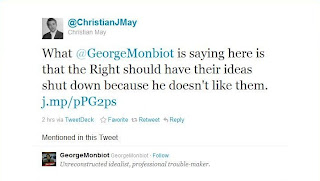 Sadly, one poor soul failed to even read Monbiot’s latest piece, let alone the earlier one: step forward Christian May, formerly of the Young Britons’ Foundation (YBF) and now with lobbying firm (now there’s a coincidence) Media Intelligence Partners (MIP). May went off the end of the pier in some style on Twitter, expertly transferring the attributes of paranoia and hysteria to Monbiot after displaying them himself. 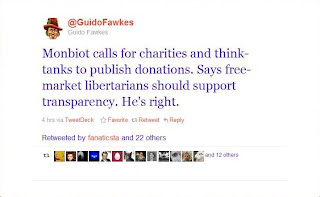 May manages not to notice that the perpetually thirsty Paul Staines, who styles himself Guido Fawkes, and an arch-libertarian, agrees with Monbiot’s premise that those who seek to buy influence should be accountable. But May cannot stop spewing the platitudes: it is as if he is demonstrating a conditioned reflex, that once set off, the torrent of ranting must continue. 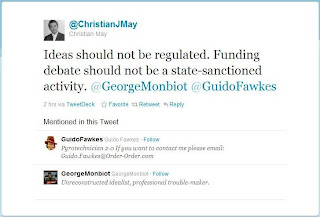 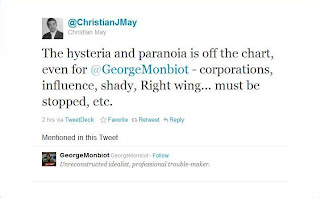 What May also demonstrates is a lack of basic courtesy towards those who are not in agreement with him: he is all too ready to fire off a salvo of abuse, rather than engage in discussion and accept peaceable disagreement. The thought that persuasion comes more readily through engagement, and is unlikely to come about by hectoring dismissiveness, appears not to enter. 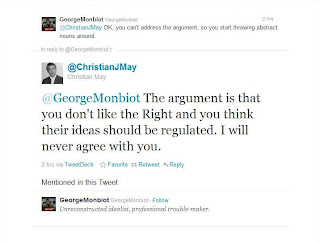 But he does let slip the name of the lobby group for whom he holds the greatest fear of transparency: no prizes for discovering that this is our old friends at the so-called Taxpayers’ Alliance (TPA). This among all the Astroturf lobby groups is the one that shows the greatest determination to keep its funding secret, and whose staff are consistently defensive on the subject. 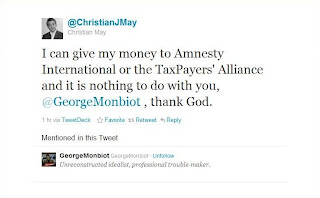 It is also why, ultimately, the sources of the TPA’s funding will be discovered and published, whatever the level of hostility displayed by its supporters. In the meantime, were I wanting to engage the services of a lobbying firm, Christian May would have ensured I did not consider touching MIP with my worst enemy’s longest bargepole.

A useful corollary to May's bleating is that were the TPA's source of funding to be revealed, their influence would automatically be shut down...

The mind boggles - who or what could possibly be *that* toxic?