Who Is Felicity Parkes?

Anonymity does not keep well in the twin worlds of politics and journalism. The identities of those behind the pseudonyms used by hacks in the mainstream press – and even at Private Eye – have been known for years. The attempt at concealment by the perpetually thirsty Paul Staines, who styles himself Guido Fawkes, did not survive a Newsnight encounter with the Guardian’s Michael White. 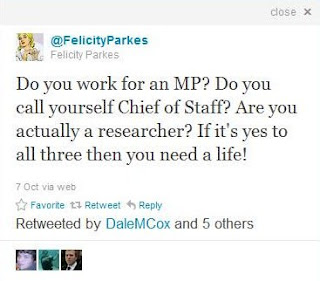 Nevertheless, another mystery alias has appeared on the scene recently, that of Felicity Parkes. Who she? Well, she calls her blog “Diary of a Westminster Bag-Carrier”, which sounds as if she is a mere secretary or office assistant. But this Tweet, from last week, suggests otherwise. Felicity calls the shots in her office: she’s either a PS or maybe even a SpAd. 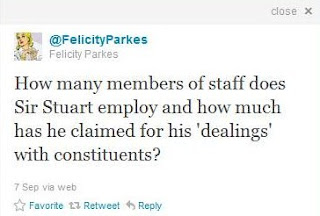 What of her politics? Her response to the travails of veteran Labour MP Stuart Bell suggest she’s hot on politicians spending too much time aboard the Westminster gravy train, or waste generally. 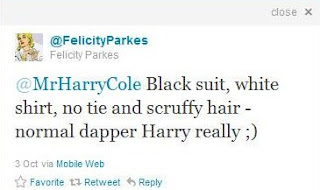 And she appears to have a soft spot for the perpetually thirsty Paul Staines and his tame gofer Henry Cole, the Laurel and Hardy of the blogosphere. So either Ms Parkes is a right leaning and libertarian spirit, or a sucker for the terminally clueless. 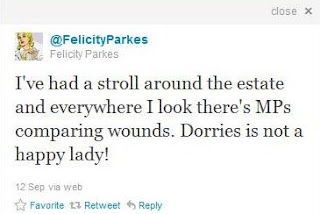 She’s also sympathetic to women on the Tory right, here telling her Twitter followers that Nadine Dorries (yes, it’s her again) is “not a happy lady”. 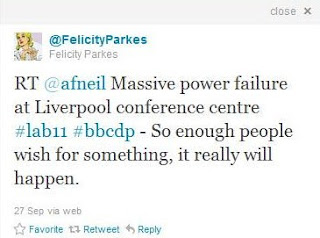 Then there is the media facing Felicity: here she relays a Tweet from Andrew “Brillo Pad” Neil, now of the BBC’s Daily Politics. She’s a keen follower of all things Brillo. 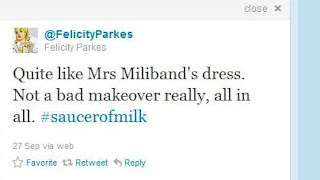 Moreover, she’s keen on putting the boot into Labour, here (admittedly, from the hashtag) being characteristically catty about Justine Thornton.

But Felicity Parkes didn’t just start Tweeting and blogging: a quick scan of that “diary” reveals someone who is confident in expressing themselves, and maybe good in front of a microphone – were she to cease being anonymous. Perhaps she did speaking or PR in a previous incarnation.

Zelo Street will continue to piece together the Felicity Parkes jigsaw, but in the meantime, anyone with more information or even a name is more than welcome to drop an email to the address shown. More on this particular Westminster bag carrier later.