Some comedy genres I get, and some I don’t, for reasons that I never stop and consider. They just don’t gain my attention. That doesn’t mean they’re good, bad or indifferent. Maybe it just means that you can’t get round to taking in everything in that area. I loved the Goon Show, Q, Monty Python, Pete and Dud, Blackadder, Ab Fab, the Daily Show, and Bill Maher, but missed Ricky Gervais.

So I had no strong opinion on Gervais. He’d done The Office, and has now become something of a celebrity Stateside. He does occasionally risqué and mildly offensive humour. There is, as the Beeb announcer might say, very strong language from the start. Those attributes do not apply only to him, though. But this week he’s appeared on the radar for venturing beyond the pale.

Gervais has a presence on Twitter, but again, this is not unique. What is unique is his use of the term “mong”, followed by attempts to excuse it by saying that the meaning of words changes over time, and so people will no longer take the word to mean a person who has Down’s Syndrome. And to that I call bullshit: the world still contains those who, like me, take it to mean exactly that. 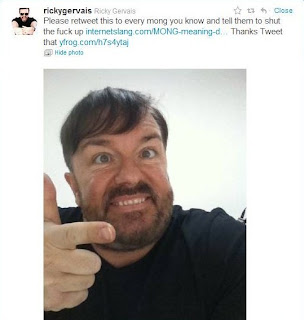 And, as Tom Chivers – one of the few rational inhabitants of the bear pit that is Maily Telegraph blogland – has observed, there is nothing edgy or boundary-pushing in making life that little bit less pleasant for a group of unfortunate and vulnerable individuals, and perhaps more importantly those who care for them, something picked up by today’s Sun. 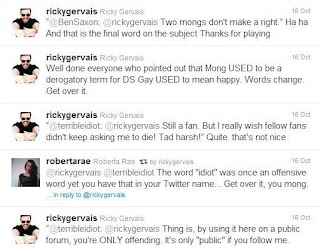 But Gervais tries to justify his word selection by suggesting that all one needs to do not to see his ramblings is to unfollow him on Twitter. Wrong again Ricky: I don’t follow Gervais on Twitter, but an open Twitter feed is open to everybody with access to the Web, following or no. And for someone in the public eye with over 400,000 followers, it’s effectively a public utterance.

And then suggesting that folks take exception to Gervais “because of [his] success” really takes the biscuit. I doubt that I’m alone in not being fussed how much dosh, property, silverware and the rest he has racked up. It’s not about getting at someone just because they’ve made it. It’s about someone in the position of being an example to others setting a very bad one.

The solution for Gervais is straightforward: just admit you were wrong, say sorry, and as Tone would have said, move on. That does not look so big an ask. But for those who are surrounded by the wannabes and the sycophantic, it may be difficult to realise that Healey’s Dictum applies even to slebs. Ricky, you’re in a hole. It’s time to stop digging.

[UPDATE 1 1600 hours October 19: the Daily Mail has arrived on the scene, which is never a good sign. In what may be a series of attacks, hack Emma Reynolds tells that Gervais "sparked fury among the disabled community", an interesting change of sides from last week, when they were laying into anyone who qualified for a Motability car.

The Mail may be a bunch of hypocrites, but that will not save Gervais. That defence didn't do Russell Brand much good. Time to say sorry, Ricky - like now]

[UPDATE 2 1050 hours October 20: the loathsome Toby Young has joined this debate. Calling Gervais "a conceited, vainglorious, self-aggrandising little tick" (quite restrained for Tobe), he then says that Gervais is entitled to make jokes about who he likes. Young thereby misses the point entirely: nobody is suggesting that Gervais should lose his First Amendment rights, rather that he has overstepped the line this time and should apologise.

Young also fails to consider the entry of other papers and pundits into the argument (see first Update above), which will cause it to keep running - again, until Gervais says sorry]

Many devout Christians found The Life of Brian deeply offensive. Do you think the Pythons ought to apologise to them, too?

Toby, I already responded to your identical Twitter message.

I'd add to that that "Many devout Christians" is at best an exaggeration, and at worst contains a significant amount of invention. Have a look around the web and try to find any trace of the "Many" of which you speak.