The promotion of victimhood appears to sell papers: the Daily Mail has decreed that it is Christianity that is under attack, generally from the vaguely defined “liberal elite”, the spread of “aggressive secularism”, and of course the dastardly BBC. Today the increasingly cheap and nasty Daily Express has gone one better: it is “being British” itself which is under threat. 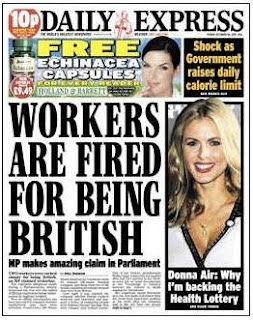 This follows the use of Parliamentary privilege by Tory MP Henry Smith, who represents Crawley, to allege that a contract cleaning firm had sacked two workers because they were British. Moreover, one of the two claims that she was replaced by a Bulgarian. Both cases are disputed, but the Express is in no doubt: the headline screams “Workers Are Fired For Being British”. 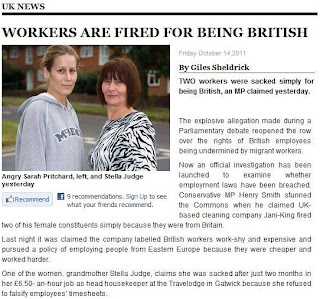 The piece alleges that the cleaning company characterised British workers as “work-shy and expensive”, while one of those sacked claims that the firm’s area manager preferred to employ Eastern Europeans as they “don’t complain”. Well, both sacked workers are certainly complaining, with one apparently taking her case to an employment tribunal. So the Express is in favour of complaining, it seems. 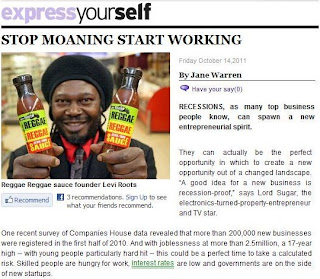 But that impression does not stand a brief scan of the Express’ lifestyle section Express Yourself. Here, top article is about how “Recessions ... can spawn a new entrepreneurial spirit”. Not only is now the time to start a business, but readers are told how great ideas are “recession proof”. And the message to all those out there complaining? “Stop Moaning – Start Working”.

Facing both ways on an issue just to sell a few more cheap and nasty papers? That’ll be another Benchmark of Excellence.