TPA – Caught On The Jobless Fiddle

Last Thursday, the so-called Taxpayers’ Alliance (TPA) decided to pretend that they were concerned about the rate of youth unemployment. So head non-job holder Matthew Sinclair penned a piece titled “Britain’s Relative Problem With Youth Unemployment Has Been Growing For A While”. At its centrepiece is a graph which purports to show comparable figures for the UK versus those for the OECD. 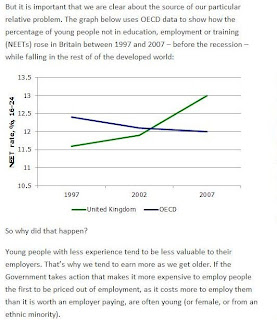 However – and with the TPA there is inevitably a however – one look at the graph shows that either the data series have lined up remarkably consistently, or Sinclair has used only three data points for each, one each for 1997, 2002, and 2007. That smacks of cherry picking, and is shoddy statistical practice. Zelo Street has taken data for the first decade of the century, with values for every year. 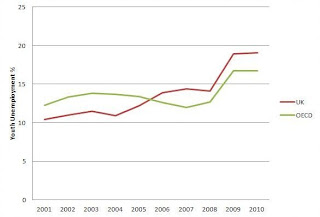 The result – with the data displayed using a Y-axis that starts at zero, as it should – shows a more nuanced picture, and also that youth unemployment in the UK did not exceed the OECD average until 2006, whereas the TPA’s piece infers that this occurred in 2003. It also shows that the figures worsened across the whole of the OECD as a result of the recession. 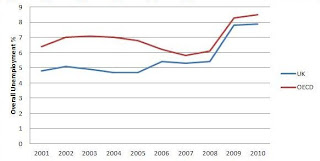 Moreover, if what Sinclair calls “non wage” costs were adversely affecting employment rates, this would be borne out by comparing UK versus OECD for overall unemployment figures. It is not: for the whole of the decade, the UK has done better than the OECD average, although there was an increase from 2006, with youth unemployment rising from 2005.

And the figures do not support Sinclair’s attempt to blame the minimum wage (implemented in 1999) and the Agency Workers’ Directive (not incorporated into UK law until 2010) for exacerbating unemployment. Plus, his assertion that “we stop driving a wedge between what employers are able to pay and what employees receive” does not make sense.

Youth unemployment is an issue that deserves serious treatment. The TPA has shown through selective and misleading use of figures that it is not interested in giving that treatment, but rather using the issue as yet another way of pushing its own agenda of demonising Government, of fitting the narrative to the headlines, and that, as too often, is not good enough.