Guido Fawked – No Research, No Result 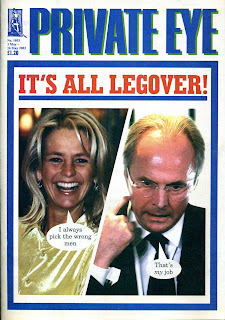 Nothing highlights the gulf between real investigative journalism and the speculative, scattergun approach than Phonehackgate. The real results have come out of the tireless work by Nick Davies and the team at the Guardian – resignations, arrests and the fall of the Screws – while nothing yet has been achieved by those going after individuals and organisations on little more than a wing and a prayer.

And nowhere is this highlight shown better than in the petulant and hectoring pursuit of the appalling Piers Morgan by Paul Staines and his tame gofer Henry Cole, the Laurel and Hardy of the blogosphere, at the Guido Fawkes blog. Morgan, as regular visitors to Zelo Street will know, is one of the least liked media people in these parts. But that is no excuse for the approach of Staines and Cole.

Whilst the Guardian built its story through literally years of research, the Fawkes blog has tried to smear Morgan based on inflating quotes from old interviews, hearsay about past stories, and even recycling items from Private Eye. This thin brew was typified by the latest “revelation”, a 2009 edition of Desert Island Discs, where there is a general chat about the “dark arts” between Morgan and Kirsty Young.

The “story” was then fed to the Maily Telegraph, which as I pointed out yesterday, has no cause to occupy the moral high ground, having illegally obtained phone records from the household of David Kelly less than five hours after news of his death was released by the Police. Sadly, not all commentators have hailed this as a game changing discovery, and Morgan is still there at CNN.

As to the hearsay strand, this was exemplified by the attempt to cite the Mirror’s scoop of the Sven’n’Ulrika-ka-ka-ka affair as being down to Morgan overseeing hacking at the paper, when in reality the story was gifted to the Mirror as a spoiler, and it was the Screws that had been doing the hacking – hence Ms Jonsson instructing her lawyers to go after the latter (see above). 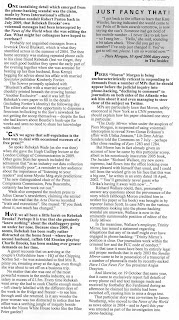 So what about the material from Private Eye? As can be seen from the image above – the right hand column is the one to watch – the latest issue of the Eye checked out the previous behaviour of the Mirror. The item at the foot of the page, about Manchester United defender Rio Ferdinand, was then featured by the Fawkes blog the following day, with the “Just Fancy That” item being directly recycled the following Sunday.

And nothing has changed with the latest “revelations” being the Desert Island Discs discussion, and now a diary entry from Morgan which is being hailed at the smoking gun, referring as it does to a voicemail message and the Sven’n’Ulrika story. But this does not admit hacking, and when put alongside the account in Private Eye issue 1053, looks as flat as ever. Time for some proper research, chaps.

[UPDATE August 3: a shout-out, if only by inference, in the latest issue of Private Eye (number 1294), where they tell that Morgan was "pointing his Twitter followers in the direction of a story in Eye 1053". The reference to that issue was not made by Piers Morgan, but by this post. My thanks to the great and good Emmanuel Strobes (for it is he). I'll be looking again at the Sven'n'Ulrika story soon]

no cigar. He's guilty as hell.

No wonder the BBC fired you. said...

He lied on TV though? Said he never published a hacked story, but then told the Mail the story was hacked?

Morgan is a lying, two-faced, forked tongue, weasel of a man. I dont care how many namesless links he pulls out, how many silly little blogspot pages he tries to. He's still a cunt.

Anyone with a brain can see the case against Morgan has not been made.

I don't particularly care for Morgan, but if Mensch and web troll Guido Fawkes[& co) aren't careful, they are going to be become even more of a laughing stock then they already are.

Facts, not speculative inflation will win the day. The real tragedy is with every passing day that Guido trumpets his laughable 'scoops' against Morgan, people lose interest in it it actually being properly verified.

So Moron didn't hack it himself, but HE was EDITOR who PUBLISHED a story acquired through HACKING.

Yet Moron complains he never published a story acquired through hacking. What part of it do u not comprehend, oh Love Child of Cowell/Moron?

One minute you say you never printed a story using dodgy arts, even though you admit in your oh so accurate, and oft self publicised diaries, the next, bits of said diaries and interviews that weren't challenged by Moron when first printed, are now trumped up libels..

@6, you should look at the account in the Eye, second image in the post. The Mirror may have known that the Screws had been hacking, but the Sven and Ulrika story was gifted to the Mirror, whose hacks just had to turn up and write it.

erm, the NOTW 'hackgate' story has been running the best part of 6 years. The various inquiries will take place over the next 2 years - so there is nothing wrong with the timing.

In addition, the more snooping into the affairs is done (particularly by the Mirror group themselves) then the more fuel to the fire, and given that journalists move around I'd be surprised if one or two were not prepared to come forward.

Staines is really dredging the depths if all he can do is recycle stuff from Private Eye. What does he pay ToryBear for?

I have nothing against Piers, don't mind him as an interviewer and believe he's innocent until proven otherwise.

However
http://blogs.channel4.com/factcheck/factcheck-did-piers-morgan-boast-about-phone-hacking/7294
"In 2006, an overview of the Operation – What Price Privacy Now? – the Information Commissioner’s Office (ICO), listed the publications whose journalists were “customers” of Whittamore.
...
Daily Mail journalists topped the list, with 58 journalists identified as dealing with Whittamore on 952 different occasions. Tot up all the titles however, and Trinity Mirror trumps the Daily Mail and General Trust (DMGT) – with 1,692 dealings with Whittamore. Of the 305 journalists involved in the case, 117 worked for Trinity Mirror titles and 98 for the DMGT."

That appears to have happened during Morgan's watch.

When you look at that with the other stuff that has come out:
http://order-order.com/tag/piers-morgan/
- even questioning the quality of journalism in that blog (though he has backed up his posts with links or quotes) ...

And this in his background:
http://www.telegraph.co.uk/news/uknews/1461904/Mirror-editor-sacked-over-fake-photos-of-torture.html

along with the tape
http://www.telegraph.co.uk/news/uknews/phone-hacking/8664704/CNNs-Piers-Morgan-told-interviewer-stories-were-published-based-on-phone-tapping.html
and the 67,000 pounds
http://www.independent.co.uk/news/media/press/hacking-was-endemic-at-the-mirror-says-former-reporter-2319039.html
and the BBC claiming they have three sources
http://www.bbc.co.uk/news/uk-14258496

Surely in light of all that and in consideration of the inquiries going on to get to the bottom of this issue, a few eyebrows are legitimately raised that justify looking a little deeper. Going after the blogger who has backed his stuff up to some extent looks more like trying to shoot the messenger.

The comment posted at 1521 hours bears a remarkable similarity to the style of Paul Staines' tame gofer Henry Cole.

And it will have no effect on what I post next - which will also be "backed up" with links to other sources.

Until this blog post, the names "Paul Staines" and "Henry Cole" were completely unfamiliar to me. Beyond this post, I don't know anything about them. I reside in Canada as you can see on my IP address and I have nothing to do with any of the parties nor the media - absolutely no dog in this hunt.

Was that just another attempt at shooting a messenger?

It is inconcievable that only the NOTW journalists paid investigators to hack phones and computers. All the tabloids would have caught on and we just wait for the evidence. The real problem is the uneducated brain dead readers that buy the papers to read such drivel. All Morgan is guilty of at the moment is appealing to that very audience with trite journalism and terrible television. Makes me sound like a snob, but I'm not. I just have principles and an education. I also don't benefit from insider dealing tips or fake photos, both of which Morgan is guilty of.

I have no idea who you are Zelo Street, but I think Guido Fawkes's site is brilliant. He is way ahead of other journalists with his stories and they are accurate. Before you suggest it, I have no connection with him at all, I'm just a happy reader of his.

Not sure if the bloggers you are attacking are pros or not, and it makes a difference. Raising issues and cinnecting dots is a perfectly legitimate role for a citizen blogger with a day job.

Bottom line is simple: Editors are responsible for what is published in their publication. Clearly Morgan and all these other editors and executives either new damn well what they were paying for and printing, or they wete completelt negligent. They should never be able to find work in journalism again.

Nobody comes out of this with much credit. I hold no brief for Piers Morgan and am profoundly grateful to the United States for keeping him across the pond much of the time. He has at the least sailed very close to the wind in the past - notably over the insider-dealing issue.

But Louise Mensch going after Morgan (surely one of the few recorded instances of the edible in pursuit of the unspeakable) with gossip, blatant misreadings and unfounded assertions, is herself using the tactics of the tabloid media that she complains of. If she has good evidence against Morgan, the forthcoming judicial inquiry is the place for it.

Posters who make wild accusations - such as claiming that Morgan edited the Sun, and that there is a book somewhere with him claiming to have obtained the Sven and Ulrika story through hacking phones - are likely to have their posts removed for their own safety (and mine!).

Spammers are not welcome at this blog.

Please jail Piers Morgan. Please. Not for anything in particular. Just for all of us.