At the start of this month, the perpetually thirsty Paul Staines, who styles himself Guido Fawkes, gleefully reported two Tweets from freelance author Kia Abdullah, telling that she “Laughs At Death Of Gap Year Kids”. The conclusion had to be that Staines was not merely highlighting death, but that the young men in question were on a gap year. 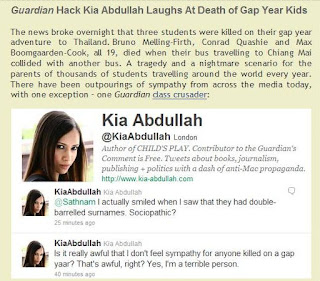 Mockery aimed at gap years, therefore, is A Bad Thing. In Staines’ book, this is the act of a “class crusader”. So gap years are, to follow the logic of the Fawkes blog, A Good Thing and should not be mocked, as this is just one of those nasty and hateful acts indulged in by those rotten lefties.

Move the clock forward to today, though, and following the sentencing of guitarist Dave Gilmour’s adopted son Charlie to 16 months’ jail following last December’s student fees protests, one blogger has sought to downplay the severity of the punishment, Tweeting that “It’ll be like an exotic ‘gap yah’ break”. 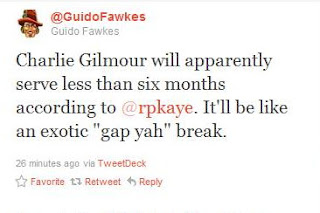 Who might be mocking gap years in this way? Step forward Paul Staines! Clearly the Great Guido has no problem with a little hypocrisy.
Posted by Tim Fenton at 14:12