Think Before You Allow Comments – 2

It is now a day further on from the ruckus caused by the author and commentator Kia Abdullah, and her achievement in implicating the Guardian in what was in reality a moment of purely personal stupidity. But at the bear pit that is Maily Telegraph blogland, the comments stream following Will Heaven’s post on the affair continues to resemble a sewer.

As indicated at the end of my post yesterday, I contacted the moderators in search of an explanation. The result was as predictable as it was disappointing: a standard reply suggesting that, should I object to any comment, I should “report” it. The wider point about proscribing certain behaviours while not in reality dealing with them was not addressed. Some comments, however, were edited later in the day. 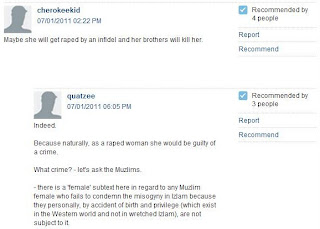 But many others are still being allowed to remain. This comment, “Maybe she will get raped by an infidel and her brothers will kill her”, along with its follow-up, are from Friday afternoon. 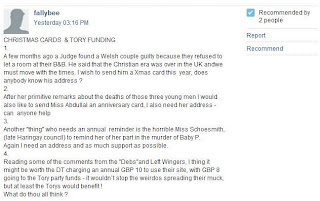 More disturbingly, and also not edited despite being published yesterday afternoon, is this comment, a fishing expedition looking for Ms Abdullah’s address (and those of two other people). 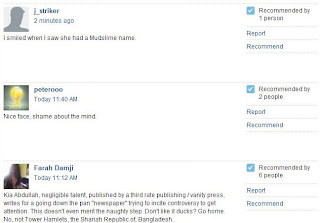 And, although racism and personal abuse are supposedly outlawed at Telegraph blogs, here a commenter uses “Mudslime” instead of “Muslim”, while another tells Ms Abdullah to “go home” to Bangladesh (the latter was, at least, later edited out). The personal abuse continues, with this contributor making a derogatory reference to a possible relationship in Ms Abdullah’s personal life.

And sooner or later, the inevitable “class war scum” appears, and is recommended by nine others.

But one commenter has got Will Heaven figured out: “Insensitive journalism just so he could have a dig at the Guardian” is spot on. Because that is the only plausible reason for this post. And what it has underscored is that the Telegraph pays lip service only to its own comments policy, allowing racist, misogynist, Islamophobic, sexist and abusive behaviour to flourish unchecked.

Isn’t it about time that this sewer was cleaned up – for good?
Posted by Tim Fenton at 12:02