Guido Fawked – No Research, No Result (4)

Another day, another lack of a result in the increasingly desperate campaign to damage the appalling Piers Morgan by the perpetually thirsty Paul Staines and his tame gofer Henry Cole, the Laurel and Hardy of the blogosphere, at the Guido Fawkes blog. Not only has there been no result: the star witness, Tory MP and author Louise Mensch, has retracted her bogus assertion against Morgan.

Ms Mensch, who claimed that Morgan had boasted of getting the Sven’n’Ulrika scoop via phone hacking – he hadn’t, and Zelo Street has pointed up a variety of evidence to show that, if any paper was hacking, it wasn’t the Mirror – has now written to John Whittingdale, chairman of the Commons culture committee, admitted she had “wrongly stated” in her appearance on that committee.

She blames the Maily Telegraph for making the claim, repeating the assertions of “a blogger” (wonder who that is?). But fair play to her, Ms Mensch says “I must apologise to Mr Morgan and the committee for this error about his book”. There’s only one blogger who has been majoring in throwing dirt at Morgan on the hacking front, and that is Staines.

So what of the reaction from the Fawkes blog? Sadly, anyone assuming that Staines and Cole might even consider approaching the small yet perfectly formed tray of humble pie, let alone eating from it, will be sorely disappointed. The Fawkes blog has not even mentioned Ms Mensch and her retraction. There has not even been an attempt to spin the news for positive effect, as happened with the Chris Huhne expense claim rejection, which I covered yesterday. 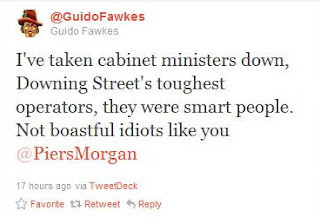 And, if the desperate tone of Staines’ Twitter efforts is anything to go by – he tells Morgan how he’s “taken down cabinet ministers” in an (unsuccessful) effort to get attention – the Fawkes blog may be running on empty. Unless they can come up with more than book and article excerpts where Morgan says he was played a voicemail, Staines and Cole are stuffed.

So that looks like yet another glorious failure. As I said earlier, time to do some proper research, chaps.