A regular visitor to Zelo Street recently tweaked the Twitter tail of Paul Staines, who styles himself Guido Fawkes, only to find Staines posting a strangely tetchy reply, and one that does not stand a little factual analysis. 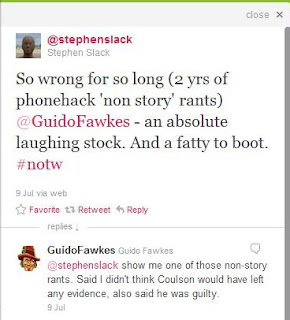 The Tweet that caused Staines such significant distress suggested that he had not taken Phonehackgate seriously for the past two years. The reply challenges the original Tweeter to show The Great Man the evidence, which I am happy to do on his behalf. 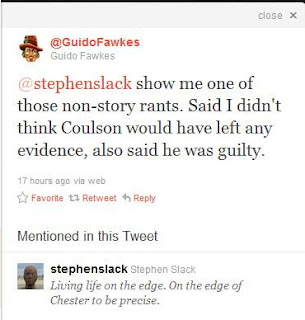 “Show me one of those non story rants” bleats the Great Guido. And lo, a non story rant was offered up after a couple of minutes’ Googling: back in July 2009, Staines penned a post titled “Guardian Get Over It”, where he told that “it isn’t news ...” and then that “it wasn’t news ...”, and “Hell ... they have even roped in ... Tim Montgomerie ... seven articles today ... isn’t that overkill?”.

In September last year, readers were told that it was the Mirror and Observer really, then that the Guardian was “grasping at straws”. The following month, reassurance was given that “It doesn’t look like Andy Coulson is being forced out” (and check out the ludicrous idea of Paul Dacre or Kelvin McKenzie heading the BBC Trust).

The next month “without a smoking gun, Coulson isn’t going to be forced anywhere”, followed by “[Tom] Watson’s ... claim that Coulson is off imminently is nothing but traffic grabbing bluster”. Finally in December came the superbly misjudged “it looks like Coulson will stay in Downing Street as long as he wants”. Indeed, the Fawkes blog was still mocking the Guardian on January 19 this year. Two days later Coulson was gone.

And spinning by trying the “it doesn’t actually say non story anywhere” line doesn’t cut it. The short description “non story rant” captures the essence of the misjudged ramblings of the Great Guido as he called Phonehackgate wrong time after time. Only when the air turned dark last week through all the solids hitting the fan did Staines realise that he’d scored another heroic failure.

But credit where credit’s due: there was no dissent from the assertion that he was “an absolute laughing stock and a fatty to boot”. That would have been stretching credibility too far.

He's now trying to suggest a recent Christopher Hitchens piece just up on Slate claims Rusbridger was a hypocrite for publishing the Wikileaks' papers. In fact Hitchens writes:

"Over the same period, Rusbridger and the Guardian formed the London end of the media consortium that tried to impose some element of sorting and priority on the mess that WikiLeaks had become. Now here was serious disclosure—some of it gained by invasion of privacy—on matters of real importance. What strikes the eye about the material in the News of the World is its relentless nullity: when cruel things happen to unimportant people, or when sordid things happen to famous people. Prurience and voyeurism supply the only energy."

Guardian not happy at Cole's Blagging