Harry Potter And The Churnalist Of Mail

Whatever else can be said about the Daily Mail, one thing has to be conceded: this is, with its Sunday stablemate, the best resourced paper in the UK. Whenever the chequebook needs to be opened, the Mail will be first. Moreover, it pays its hacks top dollar – or perhaps that should be too many dollars, given the dubious level of the talent on offer.

So one might think the Mail could bother to research and sub its copy with more than merely passing diligence, but a piece today about the steam locomotive that pulls the mythical “Hogwarts Express” suggests otherwise. Where the ubiquitous “Daily Mail Reporter” gets much of the piece is not known – perhaps it’s a publicity teaser that has been churned over. 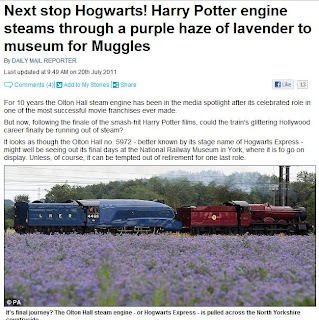 The factual detail is abysmal: the top picture is captioned as the loco “being pulled across the North Yorkshire countryside”, except that the other loco is being pulled, which is later conceded as the article tells “Olton Hall was seen pulling a Mallard between Northallerton and York”. Point of order: there is only one loco called Mallard, and as a record breaker in its own right, the piece could have managed to give it more than a passing mention. Unless it’s an advertorial.

But there must be a fact in here somewhere. How about “Before winning the coveted role in Harry Potter, it was on the verge of being broken up and ‘turned into razor blades’”. Well, no: Olton Hall got the Potter job ten years ago, but left the scrapyard twenty years before that. What, then, of “More than 200 locomotive [sic] have ended up as ‘engine corpses’ assigned to the scrap yard”?

Well, BR scrapped not 200, but several thousand steam locos in the last decade of steam traction. Maybe the number was arrived at by counting those that had been rescued from Woodham’s yard in Barry over the years (Olton Hall was one of these). And the Mail even gets the date the loco was built wrong – by just four years, mind.

But what of the assertion that Olton Hall may be facing retirement? It’s news to the railway preservation community: the loco is certified to run on the national network until 2014, and its boiler has a “ticket” until 2017. This suggests that the source of the Mail article is indeed a publicity teaser, and Olton Hall will stop over at York’s National Railway Museum briefly before the announcement of more “Hogwarts Express” tours.

Those tours will, of course, be priced accordingly, with Potter fans flocking to buy – or to pester parents to stump up the cash. The Mail may not have been paid for this apparent advertorial, but it helps to fill some column inches. Pity about the quality, though.

I am shocked, SHOCKED at this terrible attention to detail. I will be contacting the Daily Mail IMMEDIATELY. Come on comrades, we must fight them until the end!

The thing is, when you see the Daily Fail get its facts so abysmally wrong on something you have some information about, you being to wonder about everything else...