Think Before You Allow Comments

Yesterday I made strongly adverse comment on the actions of Kia Abdullah, and her success in implicating the Guardian in the saga of her monumentally stupid Twitter comments on the deaths of three gap year students in Thailand. Today, though, brings news that some of those passing comment on this episode have journeyed way beyond the pale into forthright bigotry and racism.

The temptation to kick the Guardian was clearly too much for those inhabiting the bear pit that is Maily Telegraph blogland: deputy editor Will Heaven, not content to see the Guido Fawkes blog running the story, published his own post. So far, so predictable, but then the comments rolled in. And remember, these are supposedly moderated, with personal abuse, racism and religious hatred outlawed.

One does not have to look far to find demands for Ms Abdullah, a British citizen as far as is known, to be deported to either Pakistan or Bangladesh. 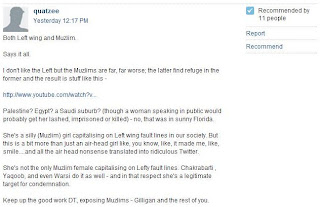 Also easy to find are derogatory references to “Muzlims”, this example rambling about “Lefty fault lines”. 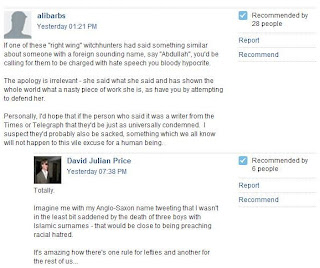 Then we get the one about there being one rule for the rotten lefties, but another (apparently much stricter) one for the right. 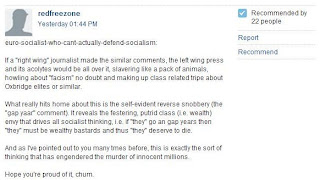 And, taking the biscuit in style, there just has to be someone who manages to tie the episode to the EU. 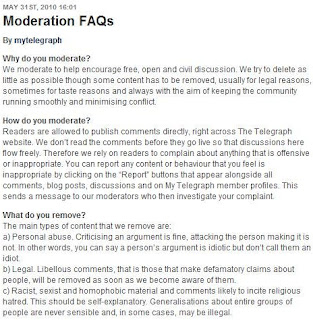 The Telegraph concedes that comments are not moderated before publication, but does proscribe “personal abuse” and material that is “racist, sexist ... and ... likely to incite religious hatred”. And in the case of all the comments culled from the 250 or so following Will Heaven’s post, the moderators have had more than half a day to take action. Thus far they have not removed any of those shown.

Moreover, in all cases, a number of fellow commenters have indicated their approval of the opinions published. Kia Abdullah was undoubtedly stupid in her actions yesterday, but the Telegraph, in allowing the publication of material that is abusive, sexist, misogynist and racist, has demonstrated a contempt for civilised behaviour and a lack of fitness for purpose.

I will be contacting the moderators in due course. Their reply may prove interesting.
Posted by Tim Fenton at 11:37

It's interesting that you chose to blog this before contacting the moderators.