The events of the past week in and around Phonehackgate have, at last, brought the name Zelo Street to the notice of thousands more people, as those on both sides of the north Atlantic have picked up on this blog’s responses to the perpetually thirsty Paul Staines and his tame gofer Henry Cole, the Laurel and Hardy of the blogosphere, at the Guido Fawkes blog. 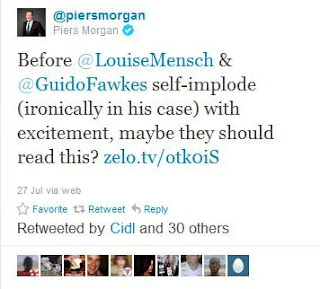 A first and most significant name check came from the appalling Piers Morgan, who in this instance has backed factual accuracy over personal praise – and may be trying to tell us that the version of the Sven’n’Ulrika-ka-ka-ka story given here and by Noel Young at The Drum is the right one. Morgan has wisely declined to go into any detail, but getting a plug from someone with over a million Twitter followers is always useful. Well done that man.

This prompted msnbc.com to also name check Zelo Street in a piece on Morgan and the attempts to connect him to phone hacking. There was even a quote from the blog, although they err by suggesting I accused the Telegraph of “faulty reporting”. But I did say that the Sunday Telegraph had illegally obtained phone records for the household of David Kelly less than five hours after the announcement of his death.

This forthright condemnation of the Telegraph did not prevent that paper also giving this blog a name check, at the foot of an article by our old friend Raf Sanchez. The thought occurred that Sanchez might not have included that link had he taken the time to follow it and read the post. But his endorsement, inadvertent or otherwise, is much appreciated.

And there was a second prompt from the Telegraph when the loathsome Toby Young, like Sanchez looking to paint Morgan’s position as less than secure (the piece includes the Fox style rhetorical question “Piers Morgan – will he lose his CNN show?”), mentioned Zelo Street on Friday, although he did not link to a specific post. I really must insult him more in future.

[The posts highlighting the Fawkes blog’s lack of rigorous research in its pursuit of Piers Morgan can be seen HERE, HERE, HERE, HERE and HERE – and it goes without saying that no dossier has yet been received by the Metropolitan Police]

I TAKE IT STAINES AIN'T ON YOUR XMAS CARD LIST TIM!@TERRY..