The Clarified Motive Of Louise Mensch

Recently, I considered the whopper deliberately told during televised and widely viewed sessions of the Commons culture committee by Tory MP and author Louise Mensch, and wondered why she had done it. Since then, Ms Mensch has continued to press the non-trivial matter of illegal behaviour by those employed by a variety of newspapers, and this cannot be other than commended.

So the clear emergence of this motive partly answers my initial question. But a further motive has also appeared: this is neither benign, and nor is it in the public interest. Moreover, that motive is as malicious as it is personal: Ms Mensch is deliberately trying to damage the appalling Piers Morgan, now in possession of the weekday 9pm ET slot at CNN. 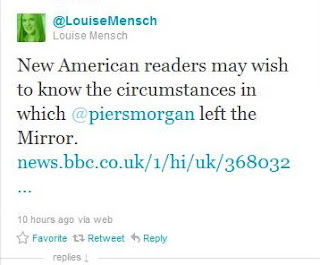 Hence the Tweet trying to bring attention to Morgan’s dismissal from the editorship of the Daily Mirror. But anyone and everyone at CNN and elsewhere who is bothered already knows the backstory. 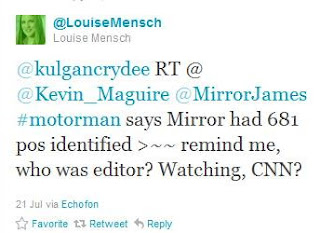 And, in case the thought enters that this was a one-off, here’s another Tweet addressed only to CNN. As this is the third rated cable news channel – behind Fox and MSNBC – and way behind the main networks (ABC, NBC and CBS), it comes clear that Ms Mensch is not pitching for audience share. 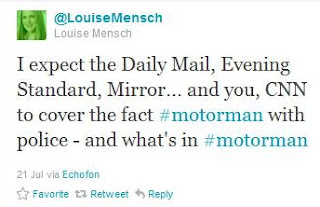 She then reminds everyone – but only CNN in the USA – that Operation Motorman is significant. Well, better late than never, say I. If only she’d read Flat Earth News. 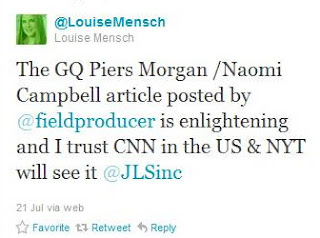 Ms Mensch then points up an old GQ article, and again prods CNN. At least this time she also mentions the New York Times, but not any other broadcaster. 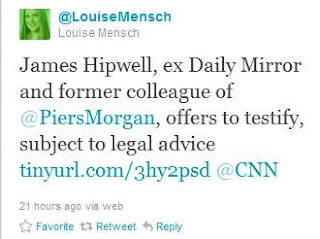 She then figures out that CNN has a generic Twitter handle and prods them once again over the potential testimony of former Mirror “City Slicker” James Hipwell. 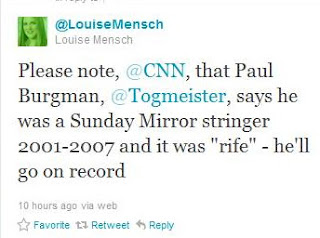 Then matters become desperate, as Ms Mensch again prods CNN, but quotes the Mirror title that was not edited by Morgan.

As Emma Thelwell, who authored the Channel 4 News Fact Check piece on the Mensch whopper, put it, what had been said were “potentially career-crucifying comments”. And Fact Check judged Louise Mensch’s assertion to be “fiction”: PolitiFact would certainly have awarded a “False”, and maybe even a “Pants On Fire”.

Being concerned about the scale of illegal activity in and around the Fourth Estate is one thing, but deliberately trying to get someone the sack and ruin his career is quite another. While Louise Mensch’s attention to the former is to be applauded, her indulgence in the latter is totally out of order. What was that about the “Nasty Party”?

Apparently she had a spat with Lord Sugar on twitter over the weekend - and bear in mind he's no friend of Morgan. If there was any mileage in this, I'm sure that Sir Alan would be in there like a shot.