This should have been posted rather sooner after the event, but I always manage to forget something when travelling, and yesterday’s something was the cable to plug camera into laptop. Apologies. 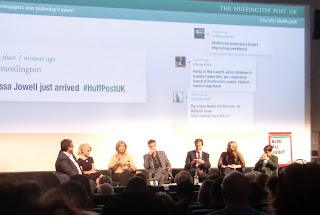 Here’s the panel discussion in the auditorium at Curzon Millbank, with the Twitter wall behind the panellists. As can be seen, it’s distracting at least one of those present even if the only news is that Tessa Jowell has arrived. There were more serious Twitter distractions, one of which was being compiled as I took the photo.

Left to right are Jon Gaunt, Kelly Osbourne, Arianna Huffington, Richard Bacon (looking straight at the camera – was I that obvious?), Alastair Campbell, Celia Walden and Shami Chakrabarti. Arianna is speaking, while Big Al is readying a Tweet which made a suitably derogatory reference to Jon Gaunt (and hence the more serious distraction). 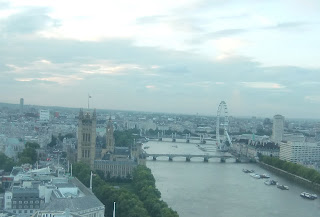 And here is the view from the 29th floor of the Millbank Tower, looking down river, and looking down on the Houses of Parliament. By this point in proceedings, it was around 2045 hours and very little daylight remained, but this gives a flavour of the views, and is not too severely affected by the freely flowing red wine.

All this, of course, was the easy part: from this point comes the hard slog.