In the Blake Edwards film 10, there is a scene featuring an elderly housekeeper who breaks wind, followed immediately by the family dog whimpering and running out of the room. Dudley Moore is informed that whenever the housekeeper farts, they always kick the dog.

That was funny, but the immediate reaction to yesterday’s explosion in the centre of Norwegian capital Oslo – followed soon after by a massacre on the island of Utoeya – was not. The rush to pin responsibility on anything that might feature the presence of Muslims was sadly predictable and disturbing in equal measure.

The lessons of recent history do not, in the aftermath of such events, appear to enter: instead, there is an immediate knee-jerk reaction that dictates that whoever is responsible must be either al-Qaeda, a franchise or associate of al-Qaeda, or inspired or encouraged by al-Qaeda. No other source is even considered.

So the explosion, and subsequent shooting, is labelled as “terrorism”, and without waiting for any more information, the rumour mill is transformed into what are asserted to be facts. This process is helped along by generous use of the rhetorical question, so often used by our old friends at Fox News Channel (fair and balanced my arse). 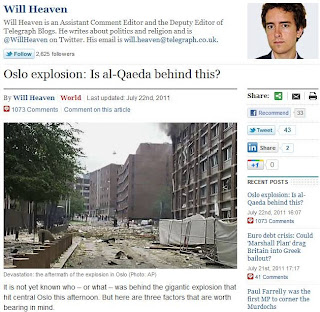 As early as 1607 hours came a suitably ill-considered example, as Will Heaven, deputy editor of the bear pit that is Maily Telegraph blogland, pointed the finger with a piece titled “Oslo explosion: Is al-Qaeda behind this?” which, freely translated, says that the Muslims did it. The post was still available after 1100 hours today. 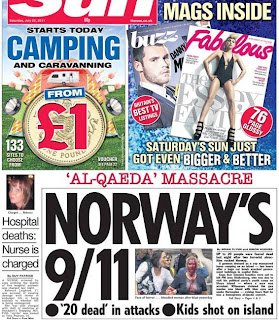 Which means that Rupe’s troops at the Sun had to outbid such equivocation, and thus the removal of all doubt as the paper’s front cover screamed “AL-QAEDA MASSACRE”. Readers were told of “two terrorist atrocities ... Islamist fanatics ... homegrown al-Qaeda convert”.

That the gunman was blond and Norwegian – he has been identified as Anders Behring Breivik, “Conservative and Christian” – has not deterred the Super Soaraway Currant Bun from going into an all too predictable default mode. And elsewhere in the media, the change of language has also been disquieting.

Instead of the bombing and shooting being described as “terrorism”, both BBC and Guardian are now using the term “attacks”. At least the Telegraph has retained the word “terror”. Why is it only “terrorism” when it can be pinned on followers of The Prophet?

And why do we keep on kicking the dog?