The General Election campaign officially begins today. And to celebrate this event, the central praesidium of the Dominic Cumminist Party (himself) has emerged from the tapestry room of his Islington dacha to proclaim the superior virtues of The (allegedly) Great And Benevolent Leader Alexander Boris de Pfeffel Johnson, accomplished through the good offices of official party organ, the Pravda Telegraph. 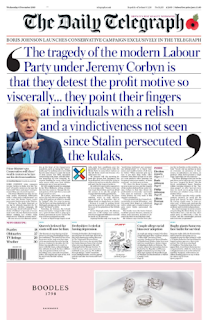 To no surprise, the target of this official Zhdanov-style denunciation is the Marxist running dog Jeremy Corbyn, focus of counter-revolutionary anti-party elements. After informing loyal readers who are still awake “Boris Johnson launches Conservative campaign exclusively in the Telegraph”, the thoughts of Chairman Bozo are laid out for all to see.

This latest communiqué from Moscow Centre, er, sorry, Buckingham Palace Road continues “BORIS JOHNSON today compares Jeremy Corbyn to Stalin over his ‘hatred’ of wealth creators as he says the Tories will ‘cheer, not sneer’ entrepreneurs if they are returned to power … [he] says Brexit will unlock ‘hundreds of billions of pounds of investment in the UK', but that Labour would deliver nothing but further delay”.

The only thing missing from the denunciation of Unperson Corbyn is the good news about increased tractor production under the ever-watchful eye and wise helmsmanship of the great Bozo. Sadly, though, apart from confirming that a former paper of record has now been reduced to the role of sub-Soviet propaganda sheet, this is total bunk. 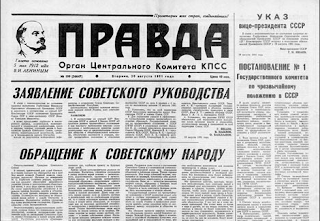 That’s because we have been here before. Many, many times before, in fact. Two and a half years ago, Adam Bienkov, who has been following Bozo’s machinations for some time now, brought Politics Home readers “The many times Boris Johnson compared his opponents to murderous tyrants”. Many times? He wasn’t exaggerating.

In 2002, he compared supporters of the Euro to Hitler. In 2014, he compared Tony Blair to Hitler. In that same year, he also compared actor and campaigner George Clooney to Hitler, while in 2011 he only compared Gordon Brown to Muammar Gaddafi. Liberal Democrat London Assembly member Caroline Pidgeon was, in the meantime, compared to the Taliban for questioning Bozo’s attachment to the Garden Bridge project.

Both comprehensive education, and University admission officers, were compared to Pol Pot, although neither is known for its genocidal tendencies. The Telegraph front page article is, therefore, merely another recycled Bozo rant to no real purpose. https://www.justgiving.com/crowdfunding/zelostreet4
Posted by Tim Fenton at 10:18

To be fair, and I'm sure they never met, but I'm pretty confident that Pol Pot would have hated Toby Young too. Glasses, you know.

I heard Steve Bannon wants to buy Telegraph...how crazy is that?!

It's The Russkis Wot Done It.

I knew it all along......is something Wot Bozo Didn't Say. But probably will, given time.

I heard that Rupert Murdoch bought The Times. How crazy was that?

It's not what you know, it's who you know and the networks created as a result of that.

And if you're wealthy enough just think of how many people you can buy cf Trump (although his wealth is alleged to be illusory being mostly loans from those pesky Russkis - his tax returns should be illuminating).