As its owners are forced once more centre stage, with their attempt to buy the 61% of Sky that they do not yet own, the Sun’s hacks are once again demonstrating why they are very good at calling out others for alleged wrongdoing, but strangely tone-deaf when it comes to their own bad behaviour, as they have targeted former pro swimmer and current sports pundit Mark Foster, whose crime is working for the hated BBC. 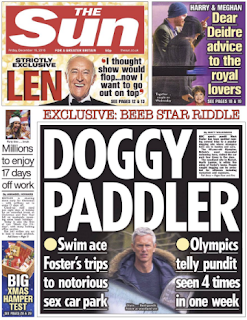 “On one occasion the tanned 6ft 6ins star, who has carved out a career as a BBC sports pundit since quitting the pool, vanished into the undergrowth alone - returning four ­minutes later”. What, that’s it, is it? Ah, but there’s more. “Former Strictly contestant Foster - who won 47 medals in a glittering swimming career and competed in five Olympics - first visited at 10.43am on November 21”. Note the precise time.

And what happened at 1043 hours on November 21? “During a torrential downpour he was spotted briefly walking towards the woods … Two days later he was again seen in the Range Rover as it parked up in the same car park at 11.26am … But he did not get out and drove off in less than a minute … He was also seen in the same vehicle at 12.27pm on November 24”. Yes, but what has he done wrong?

Well, he’s a real master criminal: “Foster, wearing a parka, stepped out of his car and disappeared into the bushes … He could briefly be seen alone in the undergrowth and emerged less than four minutes later before driving away again”. So? He could have gone for a slash. Don’t they have anything except nudges and winks? “Finally on November 25 he pulled into the almost empty car park at 11.10am, staying less than a minute”.

That’s it, is it? Given the Murdoch goons admit “The council-owned spot is close to a family picnic area … It is also a favourite with dog walkers and cyclists drawn by its bluebells, deer and stunning views of London”, and concede that Foster “lives less than five miles away”, what they have admits to little more than stuff all.

But there is one admission which perhaps tells us rather more than the hacks would like to have let us know: “Throughout the week The Sun watched as dozens of lone middle-aged people pulled up in their cars”. So they snooped on a public car park on the off-chance they might snap someone well-known. And then piled on the nudges and winks.

What they also mention at the very end of the article is “Convictions for voyeurism and exposure each carry a two-year jail sentence”. Foster did neither of those, but the Sun’s goons claim to have done the voyeurism bit. So perhaps the Met’s finest would like to mosey over to London Bridge and question the three named on the by-line.

After all, they look like they just admitted a criminal act. Murdoch hacks Own Goal.
Posted by Tim Fenton at 10:00

The police might like to take away the underwear of the 'journalists' in question for DNA testing if they can face it. This must be the ultimate curtain-twitching, pocket-fumbling, grubby little Murdoch story, mustn't it?
'Ribbikka, give those boys an Ixmis rise ....and double their Kleenix allowance!'

Forget all the Foster crap.

What's stunning about drifting clouds of carbon monoxide in Britain's most polluted (in more ways than one) city? Or its clusters of high rise office slums which make it the ugliest city in Europe?

Those Murdoch cockney goon "journalists"......can't trust them for a second......students of the aesthetics of Albert Speer.

No surprise, then, that Rupert the Creep should employ creeps who'd be willing to drill peep holes through a lavatory wall if it paid their ripoff mortgages.

Wouldn't it be great if the Met - it won't of course - hauled the Murdoch cowards and goons in front of the beak to answer charges. Just at the moment Murdoch tries to sell himself as a "fit and proper person" to the say-yes-to-another-media-monopoly yesmen.

But don't they have a referee who doesn't have a connection, or who won't bother to look, to tell him the ball was over the line?

Mr Clifford, carbon monoxide is invisible, even through the Sun's binoculars.

Still there in the visible clouds.

But don't let that mar the stunningly poisonous views.

'Exclusive' eh? Might that be because 'man visits car park' isn't actually a worthwhile story in any way, shape or form?