The tsunami of falsehood and misinformation that has poured out of the right-leaning part of the Fourth Estate since June’s referendum vote on Britain’s membership of the EU shows no sign of abating; indeed, after yesterday’s Commons debate on the timetable for triggering Article 50 of the Lisbon Treaty, the wave of propaganda has strengthened. 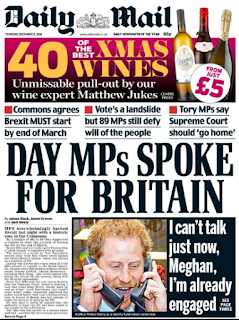 So it is that we have many editors and pundits away with the fairies this morning, showing a blatant disregard for reality as they tell their readers that some kind of great patriotic moment took place yesterday, that there was some kind of victory, a Rubicon crossed, and an inevitable march towards departure from the hated EU had begun. The only problem for those peddling this hokum was that it was totally untrue.

That did not stop the Mail triumphantly frothing “Commons agrees Brexit MUST start by end of March … Vote’s a landslide but 89 MPs still defy will of the people … Tory MPs say Supreme Court should ‘go home’ … DAY MPs SPOKE FOR BRITAIN”. Er, hello? More than 48% of “the people” did not vote for leaving the EU, so that’s “for some value of ‘will of the people’”, then. But interesting to see the Supreme Court being treated like the Mail treats all those ghastly foreigners - Send The Buggers Back! 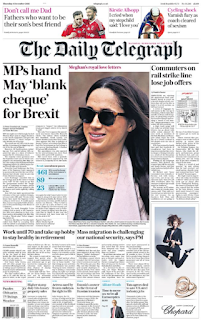 The excursion into fantasy land was continued at the increasingly downmarket and desperate Telegraph, which told its dwindling readership “MPs hand May ‘blank cheque’ for Brexit”. Those quote marks are to cover the mildly inconvenient fact that they did no such thing. And the Express has gone full Fairy Dairy with “HOORAY! MPs SAY YES TO EU EXIT … It’s about time too … now let’s get on with it!”

Compare this over-enthusiastic coverage with the more prosaic BBC copy: “MPs have voted to back the government's plan to start formal talks on Brexit by the end of March next year … They also supported a Labour motion calling for Parliament to ‘properly scrutinise’ the government in its proposals for leaving the EU”. And there was more. 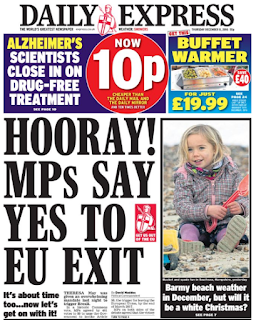 “MPs backed Labour's motion, saying the government should publish a plan and it was ‘Parliament's responsibility to properly scrutinise the government’ over Brexit, by 448 votes to 75 - a margin of 373”. In other words, the Government should actually do what Theresa May has so far resisted - to tell everyone else what her cunning Brexit plan is.

And the deeply subversive Guardian has worse news for Brexit enthusiasts: “Keir Starmer, the shadow Brexit secretary, has insisted he will hold Theresa May to account over her plans … The vote is non-binding”. The vote is non-binding … now where have we heard that one before? Moreover, Starmer has, in tribute to Pa Broon, devised five tests.

These are on the customs union and single market, sufficient detail for Parliamentary scrutiny, information for the OBR to make economic forecasts, the concerns of devolved administrations in Scotland, Wales and Northern Ireland, and the genuinely Brown-style catch all, does it “have enough detail to build genuine consensus”.

While the right-wing press whoops and hollers, Kier Starmer and his pals have laid a large enough minefield to give the Tories a rather hard time in the coming months. We have not, as Winshton might have said, yet reached the end of the beginning.
Posted by Tim Fenton at 10:10

In the cynical world of current Parliamentary politics Starmer had best be careful.

In his rush to be Parliament-clever he may have "laid a minefield." But he has laid it around himself too. In forcing May and co to pick their way through it, so will he have to. In which case he will be "exposed" as "obstructing the will of the people."

The affect on the Labour Party may be estimated. But doubtless Corbyn and McDonnell will be blamed anyway. After which, "Bomber" Benn will doubtless come to the "rescue" as a "reluctant" hero.

Par for the course in that weird world.

It would have been nice had the BBC TV news this morning veered more towards the BBC website reporting of this story than the Mail's.

I once had the opportunity to ask Harold Wilson why he had used a speech at a Labour local government conference to belay his audience with a seemingly-irrelevant and turgid exposition on some constitutional point.

Because he had wind of what the Heath government were up to, was his response. In other words, a mine-laying operation.

Opposition politics, especially in the second year of a parliament, is a long-game. It is necessary to think the war, not the immediate battle. The whole #Brexit charge-of-the-Light-Brained has a long way yet to go. If Emily Thornberry and Keir Starmer (significantly, both good legal minds) are strewing political caltrops, good for them — and Britain, and the Labour Party.

That's some top inverted commaing from Alan Clifford there :-)

Meanwhile, over at Brexit Central the new spin-off project from Vote Leave's Matthew Elliott - Elliott's head lackey Jonathan Isaby has published a list of all 91 MPs voting against the decision to trigger A50 by March 2017. A friend of mine has observed, with some justification, that it has a hint of the Daily Mail's recent "Enemies of the People" guff about it.

AS I understand it the British government is currently arguing in the Supreme Court that the failure of MP's to express an opinion on what should happen after the referendum allows them (the government) to do what they will. Perhaps they should realise that the vast majority of the country voted against Brexit or failed to express an opinion and so as a governmnet they have free reign to stop the economic suicide that Brexit would mean!!