Karen Danczuk Is NOT A A Gill

Last weekend’s papers paid tribute to A A (Adrian) Gill, who has died at the all too early age of 62 after a battle against cancer. Gill had been the Sunday Times’ restaurant reviewer (you can read his magnificent demolition of “the worst restaurant in the world” HERE) and it is doubtful that anyone will be able to fill his shoes. And one person who will definitely not be competing for the honour is Karen Danczuk. 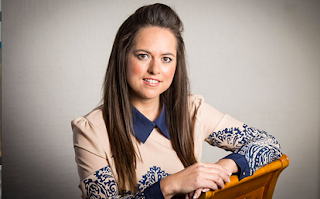 Kazza wants the world to look on her as someone who really does possess genuine talent, and to this end she has written, if that’s the right word, a “review” of her recent hotel stay in the city of York. She does warn those with a dislike for mangled prose “Over the last few months I’ve struggled to write my blogs”, and we soon discover that she isn’t joking.

The Ms Malaprop of Rochdale prepares her readers for the literary feast to come by announcing “today I thought I would start with something I would call light hearted but extraordinary for reigniting my passion for writing” before the unintentional hilarity takes hold: “I spend a lot of time living out of a bag”. Each to their own. And the hotel? 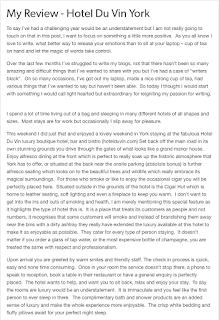 “Most stays are for work but occasionally I slip away for pleasure” (Oo-er!). “This weekend I did just that and enjoyed a lovely weekend in York staying at the fabulous Hotel Du Vin luxury boutique hotel, bar and bistro”. Kazza would also like us all to know that the hotel accommodates smokers. “Situated outside in the grounds of the hotel is the Cigar Hut which is home to leather seating, soft lighting and even a fireplace to keep you warm”.

Do go on: “I am merely mentioning this special feature as it highlights the type of hotel this is … it recognises that some customers will smoke and instead of brandishing them away near the bins with a dirty ashtray they really have extended the luxury available at this hotel to make it as enjoyable as possible”. That’s quite a feature. I’ve never seen a smoker brandished away near the bins. Can it get worse? Don’t ask. 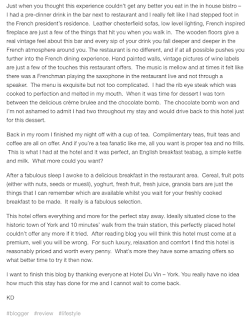 “Once in your room the service doesn’t stop there, a phone to speak to reception, book a table in their restaurant or have a general enquiry is perfectly placed”. Wow. The rooms have a phone installed. Whatever next? “The complimentary bath and shower products are an added sense of luxury and make the whole experience more enjoyable”. Like a budget B&B just off the Euston Road, then. Are there any more room revelations?

“The crisp white bedding and fluffy pillows await for your perfect night [sic] sleep”. Fresh bed linen. Like a budget B&B just off the Euston Road (again). But this is just a warm-up for “Just when you thought this experience couldn’t get any better you eat in the in house bistro –  I had a pre-dinner drink in the bar next to restaurant and I really felt like I had stepped foot [sic] in the French president’s residence”. Nasty shock for François Hollande there. And there’s more. 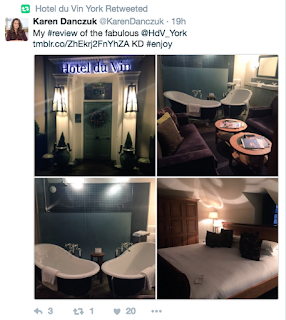 On she goes: “The music is mellow and at times it felt like there was a Frenchman playing the saxophone in the restaurant live and not through a speaker”. Why, did he sound like Maurice bloody Chevalier? “I had the rib eye steak which was cooked to perfection and melted in my mouth”. That’s French, is it? A rib-eye steak? 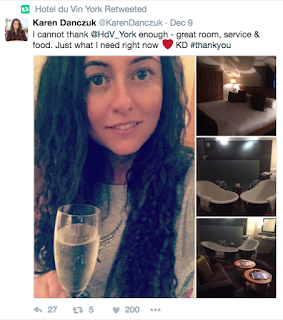 It’s so bad, it’s terrible. But she hasn’t finished yet: “Back in my room I finished my night off with a cup of tea. Complimentary teas, fruit teas and coffee are all on offer … This is what I had at the hotel and it was perfect, an English breakfast teabag, a simple kettle and milk.  What more could you want?” Like a budget B&B just off the Euston Road once more. But with added mangled prose. And, er, she still isn’t done yet.

“After a fabulous sleep I awoke to a delicious breakfast in the restaurant area”. How come you slept in the hotel eatery?

There is more in this vein, but there is only so much torture Zelo Street is prepared to inflict on its readers. What is yet more mirth inducing is that the Hotel du Vin in York has actually Re-Tweeted Kazza’s “review”. Are they that desperate for business? From what Kazza tells her readers - I assume there will be more than one of them - perhaps they are: “After reading blog [sic] you will think this hotel must come at a premium, well you will be wrong”. As if anyone can stop laughing long enough to care.

On other occasions, I would have suggested that the author of this alleged prose might be best advised not giving up the day job. But Kazza doesn’t have one of those either. One thing is certain, though: she won’t be following in the footsteps of A A Gill any time soon.
Posted by Tim Fenton at 12:50

I feel sorry for her now. Obviously she has never stayed in a hotel that has a rating above 2 stars.
The only thing missing is her claiming French food is wonderful as it's all about the sauces.
Was it a freebie? If so this establishment that has modern conveniences like a phone and teabags in their rooms has made a serious mistake. If they cater for the like of Karen I wouldn't be caught dead there.

Nice demolition Tim, although 'But will added mangled prose' doesn't enhance your case.

As always Tim you are right on the Money.

The Punctuation, Grammar and Construction is ghastly.

Several Sentences of 20+ words leave you gasping for Air.

After reading such a dull, boring piece of writing a Future Booker Prize winner she is not.

An expansion on her ex-husbands tweets about restaraunts - which always gave the impression that they had been bartered for in lieu of a bill.