While there is yet another day without trains on the part of the rail network traversed by the Southern franchise, and the industrial dispute, which has now expanded to include not only the RMT, which represents conductors, but also the ASLEF, which represents most drivers, there have been yet more opinions pieces written, generally ranging from “Sack them all” to those trying to form an understanding of the issues. 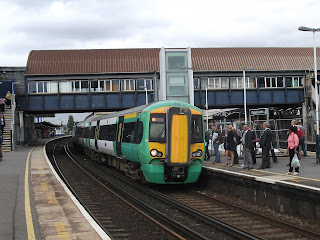 A Southern service at Clapham Junction

In the latter category is an FT View piece from yesterday, which does not have a name on the by-line, but is believed to be by Sebastian Payne. The article tries its best to go further than the uninformed, and frankly grossly unhelpful, ranting that is filling the popular press right now, but lapses into stereotypes and received wisdom.

This paragraph sets the scene: “The disruption is reminiscent of a seemingly bygone age, when trade unions frequently held the public to ransom, ostensibly to protect workers’ rights but more often to obstruct necessary change. This is what is at stake in the dispute at Southern rail, where proposed technology efficiencies have collided with entrenched union power”. Thus the lack of understanding.

That misunderstanding is compounded by “Driver-only trains have run on British railways for more than 30 years … Some 40 per cent of Govia Thameslink services and 30 per cent of the whole network already run without conductors. Much as the unions would like to play up the passenger safety argument, the reality is that this dispute is about collective bargaining power and who runs the railways”. Afraid it isn’t. The RMT and ASLEF don’t want to run the railways and never have. Stereotype once more.

It isn’t just about Driver Only Operation (DOO). As Zelo Street regulars will know, this dispute was foreshadowed by an outburst back in February at a meeting in Croydon by a senior DfT manager, Peter Wilkinson. He made no bones about wanting to back the unions into a corner, using their need to pay mortgages, car loans and credit card bills to more rapidly wear them down and get his way. The dispute has been provoked.

Moreover, Southern’s present deal with the DfT includes the responsibility for introducing more DOO, with the DfT - Wilkinson and his pals - able to hide behind them and let the franchise operator take all the hammer. The FT also misunderstands the relationship between the two unions, telling readers “The RMT has countered by recruiting the powerful train drivers union Aslef to its cause”. Nobody recruits ASLEF, sorry.

And while the FT piece gets warmer as it notes “The Department for Transport deserves some blame … The current Southern franchise is unwieldy: Govia Thameslink does not fully shoulder the financial burden for poor services”, it misses the hand of the DfT and its “managing director - passenger services”, who predicted three years of industrial disputes at that meeting in Croydon. And there is rather a lot more.

When the FT tells “Govia Thameslink is not without blame. It has put adversarial tactics ahead of a plan for winning the dispute”, it misses that the operator has had those adversarial tactics effectively imposed on it. And saying “By 2020, at least half of the Northern rail franchise will run driver-only trains” misses another point. I will explain.

There is a special problem that affects only the part of the rail network that was, before 1948, part of the Southern Railway, and that is that much of it is electrified using the third rail system - rather than overhead wires, as with most of the rest of the electrified network. Keeping passengers from forcing the doors open and walking on the track - which was, in the days of slam door trains, just another occupational hazard - is crucial, even when there are long delays to services. When that happens, either the traction current has to be switched off, or someone gets electrocuted, usually fatally.

The more coaches the driver has to look after, the greater the likelihood he or she will not be able to prevent such acts. The current dispute is also about extending DOO to 12 coach trains - longer than the current maximum, which is 10 coaches. If there is no guarantee of a second crew member on the train, it is not difficult to see why there might be concerns which have nothing to do with wielding union power unnecessarily.

On top of that, Wilkinson’s outburst last February was also about drivers’ hours, so it is entirely understandable that the ASLEF have decided to take industrial action of their own. And when the FT concludes with “Trade union power has long been declining in Britain, but the railways are the exception. They can bring the country to a standstill. This is intolerable. More and more people are travelling on the railways. They deserve a better service”, we see that exaggeration and stereotype are never far below the surface.

The idea that a less unionised workforce is somehow better is a false prospectus. There are genuine safety concerns among workers on Southern, and the usual method for their airing and resolution - meeting and negotiation - is not mentioned by the FT, and that may be because it has been absent from the dispute. That only adds weight to the thought that the dispute has been provoked by the DfT’s management.

We have not had an on-train passenger accident fatality on the rail network since 2007. There are good reasons for that, and attempts to beat up on the RMT and ASLEF are not one of them. Taking the easy way out in reporting this dispute, by saying “look over there at the rotten unions”, may serve the popular press, but one should expect better from the FT. Their readers are entitled to see the full picture, hear the whole story.

Don’t fall into the trap carefully laid by the DfT. And don’t lose sight of the real culprits.
Posted by Tim Fenton at 13:05

well, it all depends on who wrote that piece.

if it's indeed Sebastian Payne, then he's a proud tory apologist, whose opinion pieces are frankly clueless when not utterly boring.
there are much to dislike/critize with other pundits in the FT (think Gideon Rachman, Janan Ganesh or Wolfgang Munchau), but when it comes to insights, Mr Payne is pretty much bottom-barreled.

"...one should expect better from the FT."

One should expect NOTHING better from the FT. Or any of its propaganda jobsworths.