After the Murdoch mafiosi returned to claim the prize that was the 61% of Sky they did not yet own, having manoeuvred the Government into an agreeably supine position and hobbled the competition, there remained the problem of persuading the ever-sceptical media class into buying the idea that this was A Good Thing. Someone would have to make a suitably pointless gesture and spray their credibility up the wall defending them. 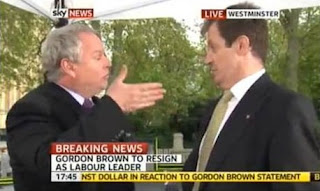 Adam Boulton - losing it in no style at all

To no surprise at all, the one left after all his colleagues had taken two steps back was the unfeasibly overrated Adam “don’t you know who I am” Boulton of Sky News (“first for breaking wind”), whose reputation has never recovered from the 2010 General Election and his inability to show dignity during a disagreement with then Labour spinner Alastair Campbell (and then later during another disagreement with MP Ben Bradshaw). 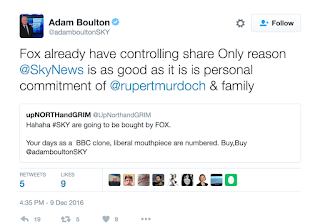 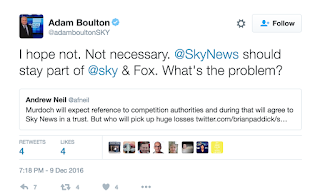 No matter - Boulton it was who went in to bat on Twitter for Don Rupioni, starting off as he meant to go on - by grovelling: “Only reason @SkyNews is as good as it is is personal commitment of @rupertmurdoch & family”. Pass the sick bucket. And Andrew Neil’s suggestion that Sky News would be placed in trust by the competition authorities almost induced panic: “I hope not. Not necessary. @SkyNews should stay part of @sky & Fox. What's the problem?” Neil, to his credit, was one of the few to call phone hacking right. 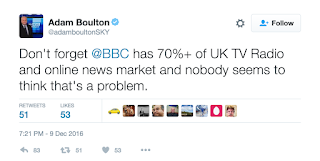 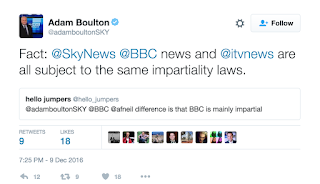 Grovel? Check! Bat away competition authorities? Check! What’s next? Ah yes, point at the hated BBC! “Don't forget @BBC has 70%+ of UK TV Radio and online news market and nobody seems to think that's a problem”. And none at all of print. And no billionaire trying to put the competition out of business. But minor point, eh? In any case, “Fact: @SkyNews @BBC news and @itvnews are all subject to the same impartiality laws”. 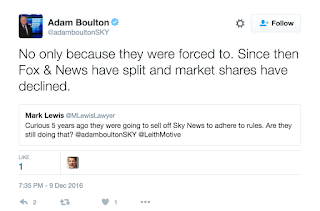 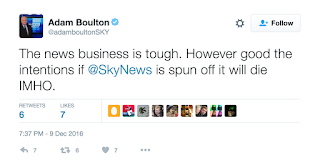 The limits of which Sky News is about to test, as I noted earlier. But do go on. After Mark Lewis reminded everyone that Sky News was going to be sold off last time round, there was more mild panic: “No only because they were forced to. Since then Fox & News have split and market shares have declined”. Not a problem now, you see. It’s not really a media behemoth with greater revenues than the Beeb. At least he was prepared to admit “The news business is tough. However good the intentions if @SkyNews is spun off it will die”. 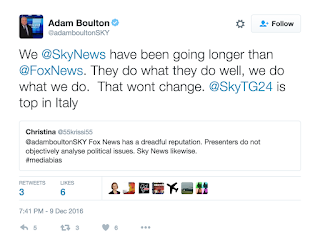 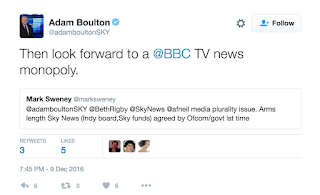 In any case, what about the Fox influence? Er, look over there: “We @SkyNews have been going longer than @FoxNews. They do what they do well, we do what we do.  That wont change. @SkyTG24 is top in Italy”. Irrelevant, irrelevant and irrelevant, in other words. And when Mark Sweney of the Guardian raised the plurality issue - which is a real concern, and will be brought up time and again - he just batted it off with “Then look forward to a @BBC TV news monopoly”. There isn’t one. And there won’t be. 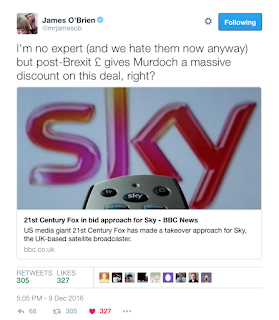 What Boulton was also not addressing was the bad taste Murdoch’s Brexit campaigning had left. But James O’Brien was more than happy to go there: “I'm no expert (and we hate them now anyway) but post-Brexit £ gives Murdoch a massive discount on this deal, right?” Right indeed. Rupert Murdoch gets his prize at a knock-down price, and the rest of the country get screwed over. Not that Adam Boulton and his pals will be telling you that.

Would Murdoch be so cynical as to play for Brexit to make his takeover of Sky cheaper? You bet your bottom dollar he would. The likes of Adam Boulton are more than happy to suck up to this Transatlantic shower of shit. And the rest of us don’t matter.
Posted by Tim Fenton at 16:23

WE are all being forcefully reminded of the quote from "uncle" Rupe which circulated before June 23rd as an explanation of his support for Brexit. "When I go to Downing Street they do what I say, when I go to Brussels they ignore me".

Boulton is just another Murdoch modular gnome without a conscience.

Like the rest of the Murdoch employees he's beneath contempt.