While the Mirror hacking trial continues - today has seen the appearance of former footballer Paul Gascoigne, who told that he knew his phone messages were being intercepted, “And people can't understand why I became an alcoholic” - there are some out there in media land whose lack of self-awareness about the destructive effects of “The Dark Arts” is utterly beyond belief, such is their ability to disregard them. 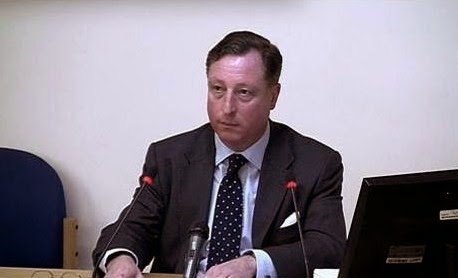 That includes those who have already got guilty as a result of last year’s hacking trial, involving those previously loyal Murdoch stalwarts at the now-defunct Screws. Among those who went to prison - in his case, it was to share a cell in Belmarsh jail with Andy Coulson - was Neville “Stylish Masturbator” Thurlbeck, who has now reinvented himself as a PR consultant, in which guise he has been speaking to Press Gazette.

Does Nev give the merest mention of any or all of those hacking victims? Is there a word of sympathy for those put under surveillance on behalf of the Screws? A pang of regret for the illegal blagging of medical records, bank account details, Police records, and other confidential information? A second thought on doorstepping, pursuit, harassment of family and friends, and the occasional bout of lying for the hell of it?

As of you need to ask: not a dickybird. Instead, Tosser Thurlbeck “has reassured colleagues that there is life after being caught up in the massive police investigations into hacking and payments … Thurlbeck says he has been welcomed back by the media industry … ‘From a purely business point of view, the demand for media professionals has never been greater. And the opportunities are there for very good communicators’”.

Get the sick bucket ready: “It is quite painful to watch dozens of former colleagues, some of them still in their thirties, feeling their careers and lives have been wrecked and they may never work again. These people are among the best in our business and they will be given a second chance, as I have. And they will be as relieved and as grateful as I am when it happens”. Nothing about the wrecked lives of the victims, then.

No sirree: “They won't find doors closing. If they have an important or interesting message to convey on behalf of a client or a vital story to tell, doors will open and people will listen … they will find both the general public and media outlets have developed a sense of perspective about the events which enveloped News International (now News UK) and the reporters caught up in them”. Perhaps he isn’t paying attention to the Mirror hacking trial.

There, Gascoigne has recalled “I felt that I could not cope with the media attention anymore and I seriously thought about jumping in front of a train”. He discussed phone hacking with his therapist, who did not believe him. The Mirror’s counsel decided, wisely, not to challenge his evidence. He concluded “I’d like to trade my mobile in for a coffin because those guys have ruined my life”. But for Nev, that’s not worth a mention.

For Neville Thurlbeck, lawbreaking is no big deal. His pals should all get a second chance, unlike the unfortunate Paul Gascoigne - and all the other victims. And you need to know why so few trust the press? What a bunch of bastards.
Posted by Tim Fenton at 12:36

The man who made his excuses and came.