Around three million tuned in last night to watch the so-called “Battle For Number 10”, which consisted of Young Dave and Mil The Younger not having a head to head debate, but being subjected to questions from a studio audience, this being supervised by Kay “Surly” Burley, and also passing before The Inquisition Of Pax Jeremiah. Both sides claimed it for their man. But there were pointers as to who prevailed. 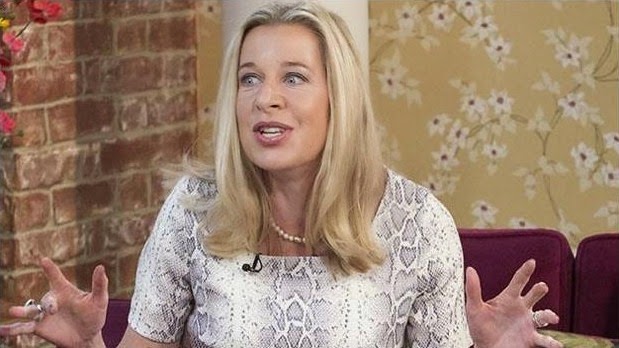 Miliband was the only one garnering applause from the audience, and for some reason not immediately obvious, Nigel “Thirsty” Farage rocked up to the event and pronounced the Labour leader the winner. But in one singularly intolerant corner of Middle England, this counted for nothing: professional motormouth Katie Hopkins, who makes Attila The Hun look like a wishy-washy liberal, had decided to kick off against Ed. 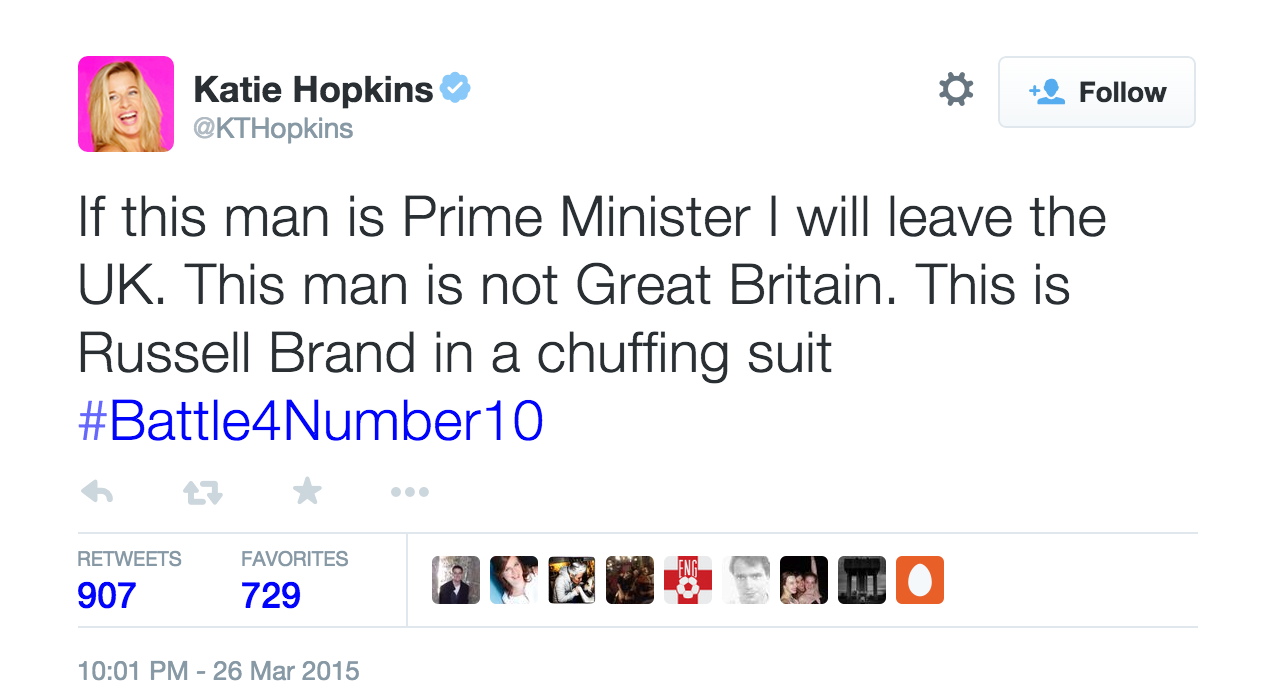 And in doing so, this least credible addition to the roster of the Sun’s pisspoor punditry may have swung many undecided voters behind Labour, as she ranted “If this man is Prime Minister I will leave the UK. This man is not Great Britain. This is Russell Brand in a chuffing suit”, which made no sense at all, except for the prospect that she would leave the country forthwith, to the relief of all those who wished she had done it earlier. 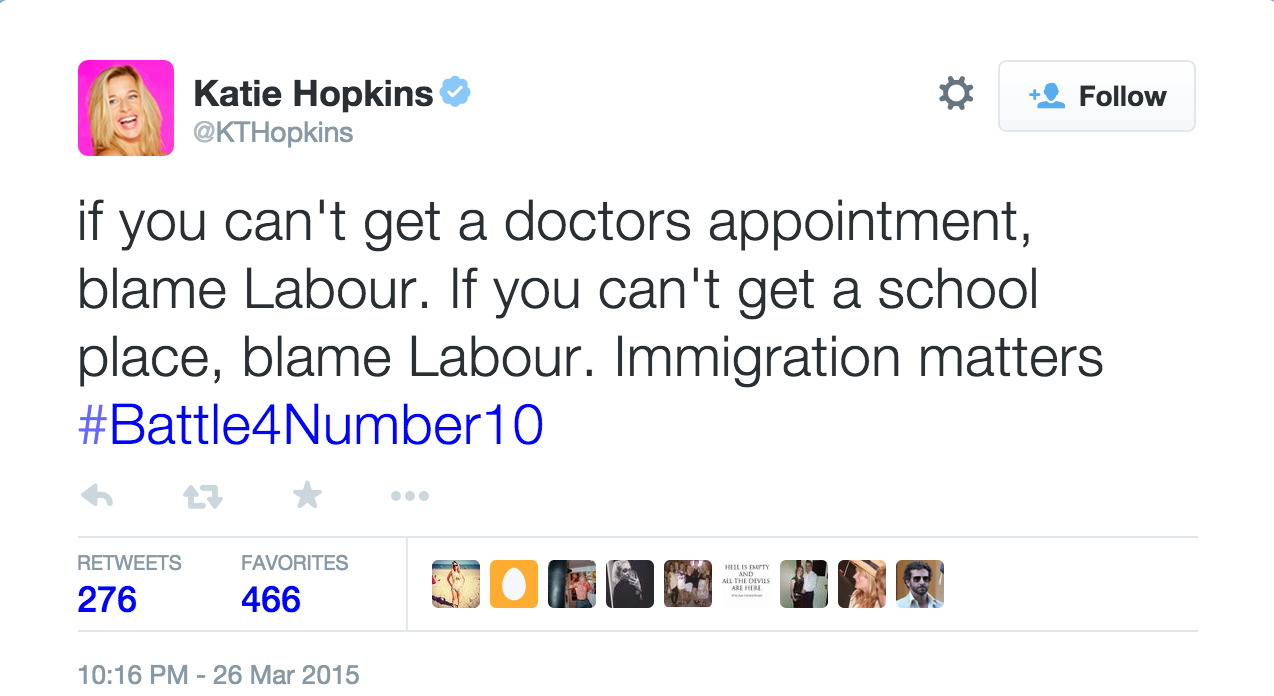 Why would she take this stance? Ah well. To have a Sun column one need not have brain engaged. Rather, one need only rant in accordance with the prejudices of Creepy Uncle Rupe. This she did: “if you can't get a doctors appointment, blame Labour. If you can't get a school place, blame Labour. Immigration matters”. Yes Katie, like immigration of the NHS staff without whom you wouldn’t get that doctor’s appointment. 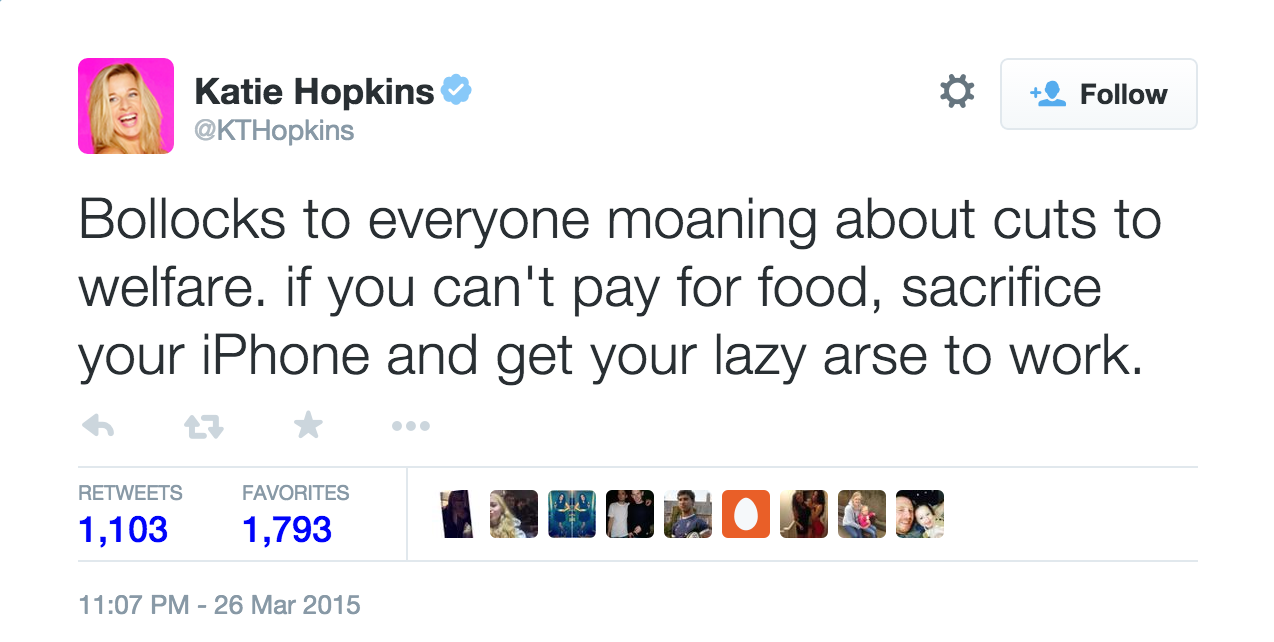 We could prevent all those Polish migrants coming to Crewe, so we’d have no Polski Skleps but lots of empty shops instead. But, as Clive James might have said, I digress. She was now off on one about welfare: “Bollocks to everyone moaning about cuts to welfare. if you can't pay for food, sacrifice your iPhone and get your lazy arse to work”. There’s nothing like that authentic combination of prejudice and ignorance. 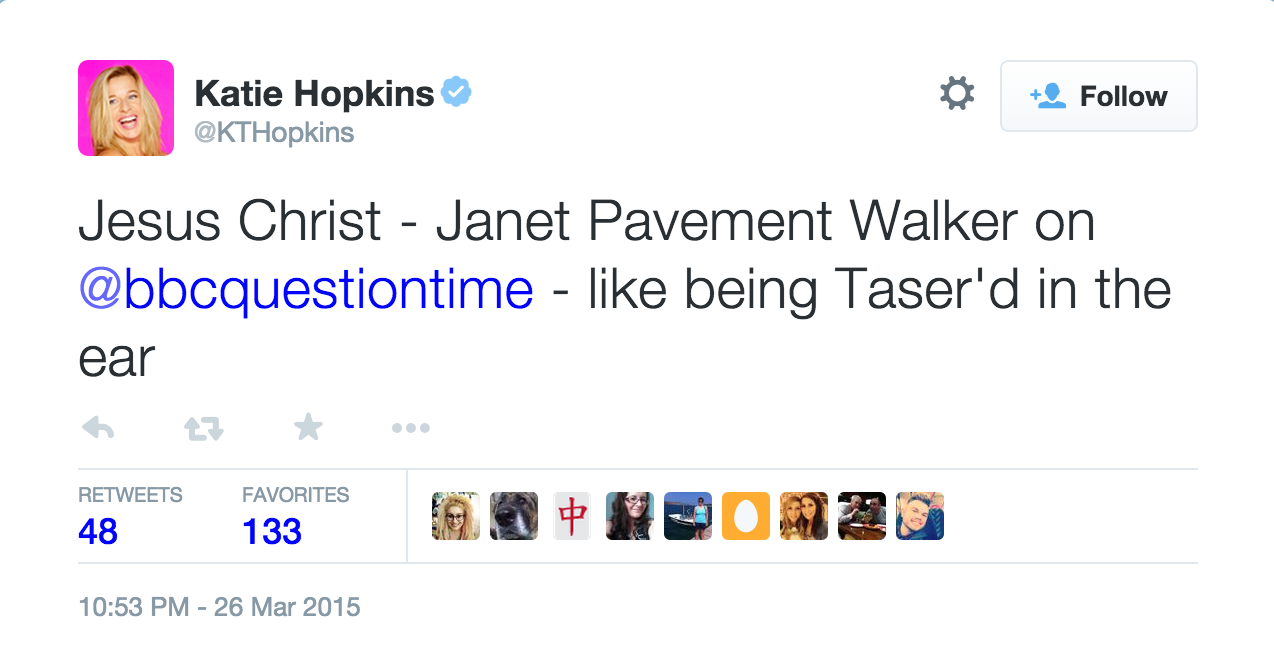 And there was nothing like the old pot and kettle for Katie, either: “Jesus Christ - Janet Pavement Walker on @bbcquestiontime - like being Taser'd in the ear” she carped, probably meaning Janet Street Facking Porter, whose presence on the box is at least moderately amusing, unlike Ms Hopkins, who is no laughing matter, unless of course it is her at whom everyone is laughing. 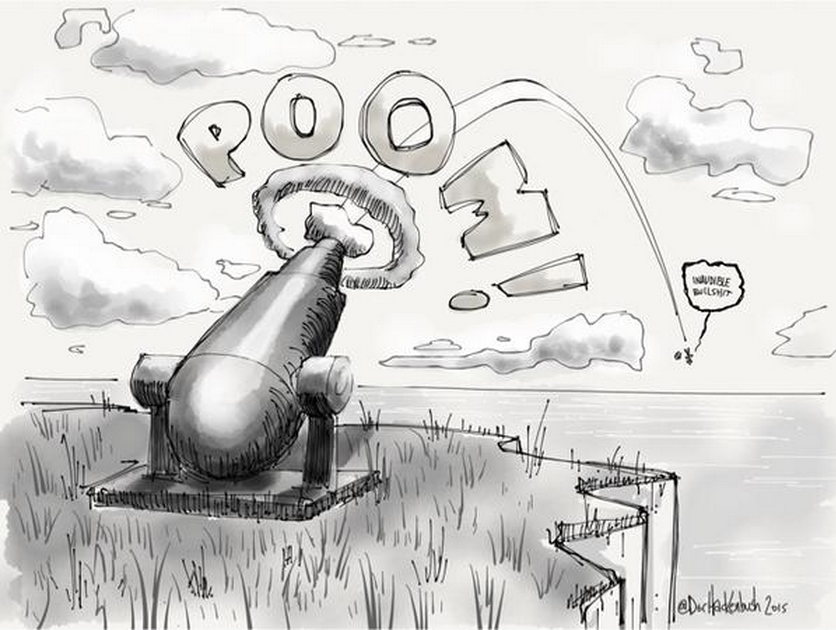 Then, realising her earlier comment had made the idea of her leaving the country popular, she suggested “Thank you for your kind offers of lifts to the airport. I won't be needing one. Ed is Marvin the Paranoid Android”. Well, partly right. She won’t need to go to the airport, as the good and great Doc Hackenbush has devised a far more satisfying way of sending Katie on her way. By cannon. This has the benefit of being a true one way ticket.

Vote Labour, banish Katie Hopkins for good. That might just be a winning line.

[UPDATE 28 March 1615 hours: Katie Hopkins clearly believes that she needs to be much more directly abusive to the Labour leader, and so she has decided to cause the maximum offence not only to Miliband, but also his family and anyone harbouring the odd shred of decency. 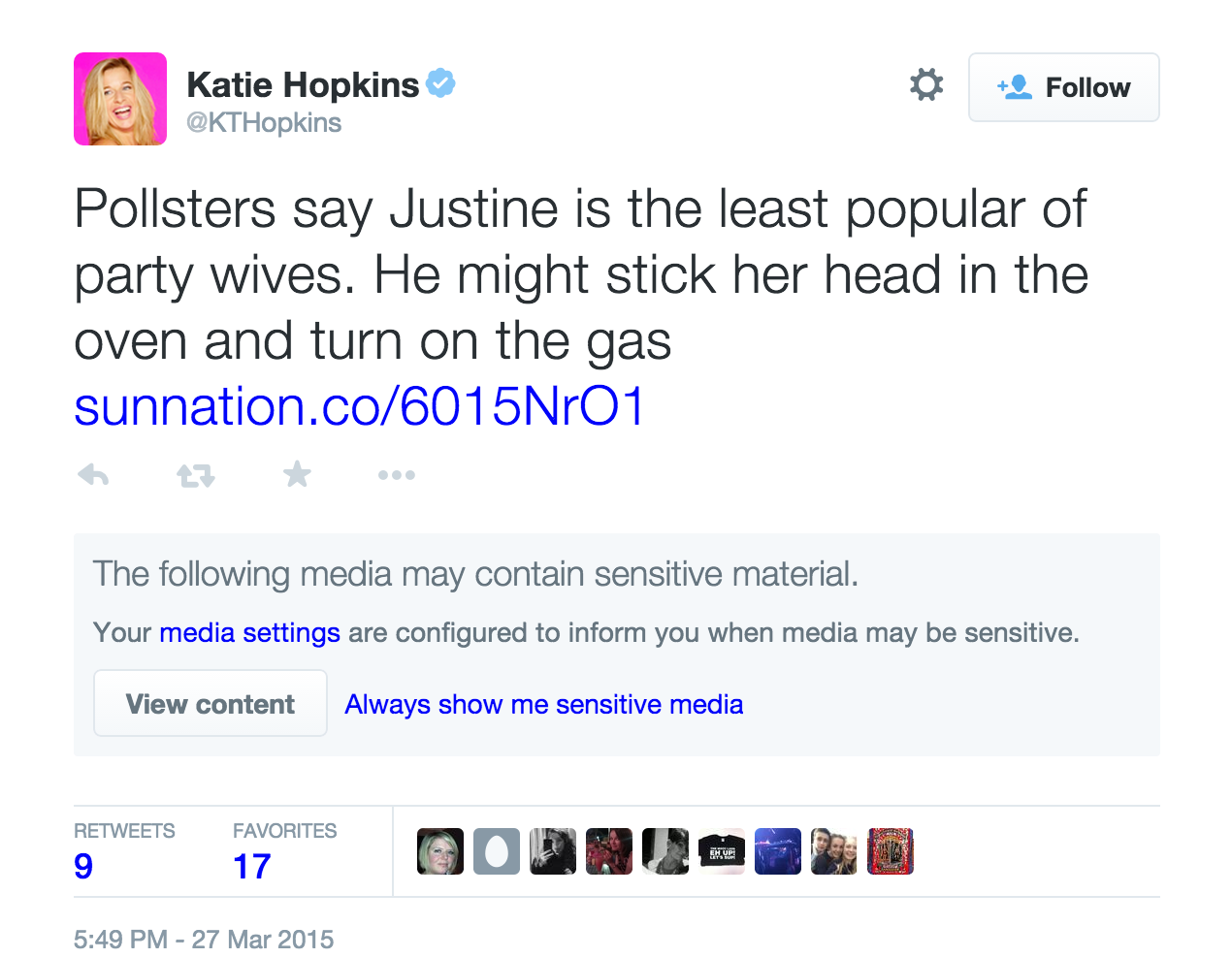 "Pollsters say Justine is the least popular of the party wives. He might stick her head in the oven and turn on the gas" she sneered.

Let's just stop that right there. Ed Miliband is Jewish. His parents fled the Holocaust. And Katie Hopkins is making gas oven "jokes" about him and his wife. And this merits a column in the Murdoch Sun, where she "just tells it like it is". Er, no, Katie, that's just not even slightly clever.

So how about you grow up enough to say sorry to Ed and Justine, and in person? It won't happen, of course. Katie Hopkins really is as revolting as her worst detractors paint her]
Posted by Tim Fenton at 17:27

Now that Katie Hopkins has helpfully promised to leave the country when Ed Miliband become Prime Minister, to which other country might she be sent, and why?

Please keep in mind that the inhabitants of Africa, the Middle East and many other apparently obvious places, most notably North Korea, have already suffered more than enough than to have to endure her on top of everything else.

Yes, I do think that her promise ought to be on Labour posters and in Labour leaflets. Like Jeremy Clarkson, she exemplifies, encapsulates and embodies the Britain that this General Election provides us with an opportunity to reject once and for all.

And we all sang woo hoo
Will she become just a shadow
Of whom we once knew
She was crazy not too bright
Not too scared to make a slight
Has she done all she can do
Please, can you leave us Katie?

Unfortunately, to the best of my recollection there is a 100% disappointment rate in respect of every self-satisfied, rich Tory-supporting shithead who's threatened to vacate the premises on the election of a Labour government. But we can dream, can't we?

We have to bear in mind that Louise Mensch & Richard Littlejohns don't live here but still manage to cause outrage & damages to our lives.

Even worse is a comment on Justine Milliband by Katie Hopkins that you may have not seen and which have questioned below (hope the link is live, otherwise cut & paste to URL if you want to see it. Thanks.)

Cue Guido's tank to The Sun's HQ with petition "Don't sack our Motormouth".

Or perhaps not - they would have a difficult choice to make.

I strongly believe in the principle of free speech, and so I cannot begrudge Katie Hopkins the right to "joke" about the wife of a Jewish man being gassed in an oven purely because she disagrees with his politics.
At the same time, however, I can absolutely condemn the insinuation she's making and judge her for being even more of a despicable human being than I had already presumed her to be

Can we just please, please, please ignore this woman? She is of no significance, she trades on (and presumably makes a lot of money from) rudeness and insults. Don't feed the troll!

She's mentioned that someone is crowdfunding to pay for her flight which gives me another idea but raises two questions.

1. How do you set up crowdfunding?

2. How do you find a professional assassin (apparently Yellow Pages won't accept them)?

Just a very ignorant, attention seeking person from whom a psychiatrist could earn a fortune.
Anyone else seen the car sticker " live long enough to be an embarrassment to your children" ? Very apt.