The Daily Mail’s Glenda Emeritus Amanda Platell does not have a good track record when it comes to making the right call as to others’ guilt: Zelo Street regulars may recall her telling that Rolf Harris couldn’t possibly have done it, before seeing him get guilty and finding herself in need of significant logic gymnastics in order to retain a semblance of credibility. Now she has spoken up for Jeremy Clarkson. 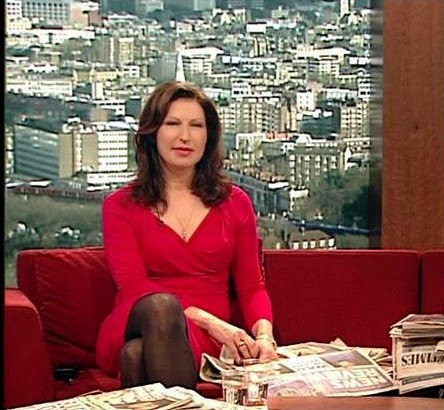 However, and here we encounter a significantly sized however, during the period between her compiling her latest characteristically catty opus for the Mail and it being published, sufficient news has come to light to suggest that she has, once again, backed the wrong horse and is about to end up covered in rather more than confusion. Such are the perils of kicking the hated BBC without looking both ways first.

“Everyone has a view about Jeremy Clarkson and the fracas over his (non) steak supper. Almost a million people who have signed an online petition supporting their hero clearly think the BBC over-reacted in suspending him. Others - including, it seems, the Beeb’s politically correct director of television Danny Cohen - regard Clarkson as some kind of antediluvian creature that should long ago have been driven off the road”. Yawn.

But she knows what happened, honest: “From what we can gather, Clarkson had spent several hours in a pub after filming Top Gear, then returned to his hotel where he had a bust-up with producer Oisin Tymon because he wanted a steak but couldn’t get one since it was so late. Tymon’s made no official complaint. It all happened outside working hours. And on balance I think the BBC has been heavy-handed”.

Not according to the Mirror, they haven’t: “The Top Gear presenter left it five days before ringing to tell BBC director of television Danny Cohen that he had ‘forcibly manhandled’ his colleague during a row over the dinner being provided. He picked up the phone when other members of the team made it clear they were unhappy about what had happened to Oisin Tymon”. And, as for that lack of complaint … back to the Mirror.

Clarkson had, allegedly, arrived “by helicopter at a hotel from a pub where he had been boozing heavily for several hours with co-hosts James May and Richard Hammond … He called Oisin a ‘lazy, Irish c***’ before splitting his lip with a punch that left the 36-year-old with blood running down his face and needing treatment in A&E, the BBC investigation will be told”. He told Tymon “You’ll be on the dole tomorrow”.

It got worse. “Paul Daniels - employment lawyer at Slater and Gordon - declined to comment on the fracas but said: ‘We are assisting Oisin Tymon in relation to ­incidents occurring during his ­employment with the BBC’”. So, Ms Platell, “heavy-handed”? “Politically correct”? “Other members of the team … unhappy”?

But she does know what has caused Clarkson’s recent problems - it’s because, having recently been divorced, he’s not married. Like, er … hello Amanda!
Posted by Tim Fenton at 10:43

I'm not married either. Excuse me while I go out and punch someone in the face.

Do you ever get the feeling this might be a very elaborate publicity stunt?

Surely if Tymon's lip got split that would be a case of assault and the police would have brought charges?

Someone out "to get" the BBC.

Currently having "technical" troubles on their news and sports websites (not good for a busy aternoon of sport).

Is Dave still saying they are friends??