Naples: The Worship Of Football

The old Shankly saying about football being more than a matter of life and death came to mind when I saw a bizarre shrine in the Centro Storico of Naples recently. And its subject isn’t, despite his best efforts, even dead yet.

Cutting through the old town more or less from east to west is the ancient and narrow thoroughfare known as Spaccanapoli, literally “Split Naples”. It can be picked out easily when looking down over the city from the heights of the Vomero district to the west.

And attached to a wall on the south side of this street is a shrine to the player who brought Napoli its greatest recent triumphs, two Serie A titles among them: Diego Maradona. 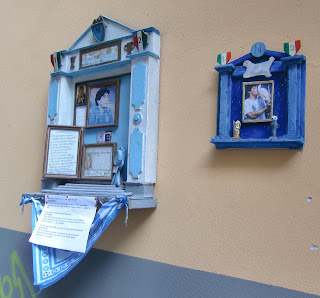 Maradona encapsulated the best and worst of the game, on one memorable occasion in the course of one match, when he first deliberately handled the ball into the England net, but then dribbled past six players to score the “goal of the century”, during the 1986 World Cup.

But, despite his later years having been blighted by drug abuse, Maradona remains an iconic figure in Naples, and hence the shrine. Bill Shankly would have approved.
Posted by Tim Fenton at 12:34